On August 19th Holy Orthodox Church celebrates feast of the Transfiguration of the Lord. On that day we had a beautiful celebration at St. George Church. Our Rector, Archpriest Igor Tarasov headed the Divine Liturgy. After the Gospel lesson he preached the following homily in English:

“Dear brothers and sisters in Christ! Today we celebrate the great holy day of the Transfiguration. The Gospel lesson told us today how it happened. Our Lord Jesus Christ took three of His disciples, Peter, James and John, led them to the mountain and transfigured before them. Jesus’ face became shining like the sun, and His garments like a light. Our Lord showed His disciples His divine glory, He showed Who He really is. The reasons we consider that event so important are two. We believe and confess that our Lord has two natures: divine and human. And everything we celebrate about Him concerns those two natures. Today, as we said, our Lord showed the Apostles that He is God. And this is one reason to honor this event. But we celebrate Transfiguration also because our Lord’s human nature was transfigured. The humanity taken by our Lord became so linked with the divine nature, so it also shone like the sun. And we may add to that reflection that it happened by the Holy Spirit, proceeding from the Father, Whose voice witnessed to the Son’s divine nature”.
“Celebrating Transfiguration we are perhaps reminded of another feast of the Church taken from the Holy Scriptures, where the divinity of Christ was also witnessed to by the Father and the Spirit proceeding from the Father – Theophany, the Baptism of Christ. Both these feasts have a great prominence in our Church. In both of them we may see the manifestation of the Holy Trinity and an indication that our Lord Jesus Christ is the true God and the true Man”.
“Transfiguration shows us that the human and divine natures of Christ are united in One Person of Jesus. As the Orthodox Church professes, those two natures are bound together in a mysterious way, being not mixed and undivided, not commingled and yet inseparable. It is also important to remember that no such a unity is possible without the Holy Spirit. That same Spirit is taking part in every event of the life of the Lord manifested to us. His action is seen in the Nativity of Christ, in His Baptism and in His Transfiguration”.
“Another important aspect of today’s feast is that our Savior is the Lord over life and death. The Scripture tells us that two holy persons appeared at the Transfiguration: Moses and Elijah. They represent two kinds of people: those who died and those who live. Moses was dead long before Jesus came into the world. And Elijah also lived several centuries before Christ, but he did not taste death, but was taken up to heaven. Now, at the Mt. Tabor they both appeared to worship the Son of God, the Lord of the living and the dead”.
“And lastly, we may notice that today’s feast which has been lost outside of the Orthodox Church. In the similar way, the feast of Theophany is almost unnoticed outside of the Orthodoxy. They are not really celebrated in the communities where people do not believe in the words of the Holy Scripture, that the Holy Spirit proceeds from God the Father alone. This error makes those Christians deprived of the right believe in Holy Trinity. But it also makes them deprived of the true understanding of the importance of the mission of our Lord Jesus Christ becoming a man, so men could become divine, could unite with God. Such a unity was shown in Christ Transfiguration. Such a unity is possible through Christ and the Orthodox faith. Because Christ united those two natures for us. And the Orthodox faith gives us an opportunity to unite them in our lives, being partakers of the divine nature”.
“Dear brothers and sisters! Let us then keep our faith in true God and pray that His everlasting light may shine to us!”

Before the rite of the Holy Communion the choir prayerfully performed festal hymns of Transfiguration.

After the dismissal of the Liturgy Fr. Igor congratulated the parishioners on the occasion of the holy day and preached a short sermon in Russian. 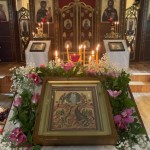 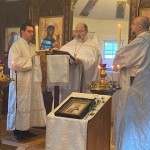 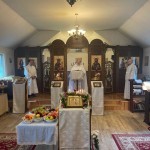 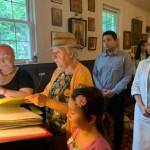 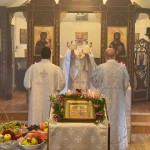 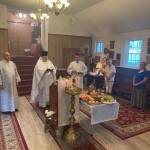 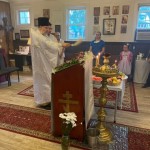 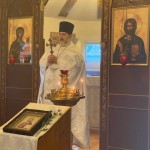 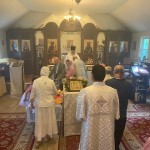