On August 22, on the 9th Sunday after Pentecost, feast of the Holy Apostle Matthias, our St. George parish had a nice celebration. Despite the worrisome weather forecast warning us of a tropical storm, we decided not to cancel the Liturgy but to gather in our church. Our Rector, Archpriest Igor Tarasov arrived from his residence in New Jersey and headed the Divine Liturgy. Most of our parishioners also came to the temple. They were joined by some parishioners of other churches where the service was canceled. After the Gospel lesson Fr. Igor preached the following homily:

“Dear brothers and sisters! In today’s Gospel we hear how our Lord came to His disciples walking on the water in the midst of a storm. We hear how St. Peter through faith joins Him on the water. Then Peter becomes distracted by the storm and cries out “Lord, save me!” (Mt. 14, 30). Our Lord reaches out and catches him and says “O you of little faith, why did you doubt?” (Mt. 14, 31)”.
“In this Gospel we see the power of faith. We see that if we have faith we can perform miraculous things. Our Lord reminds of this when he says the following: “If you have faith as a grain of mustard seed, you shall say unto this mountain, remove hence to yonder place; and it shall remove; and nothing shall be impossible unto you” (Mt. 17, 20)”.
“When we have faith we embark on a spiritual path that leads to God. That path often appears dangerous. As we see with St. Peter getting out of the boat and walking on water in the midst of a storm”.
“Once a passenger on a cruise ship approached the captain and said, “Captain, I found out that we are going to face a big storm on our way. Isn’t that dangerous?” The captain answered, “Don’t look at the storm. Look at the ship. Our ship is big, well equipped and updated. It can face any kind of storm. Again, don’t look at the storm, look at the ship!”
“Today we also have a storm, a tropical storm. Many people were frightened. Some churches canceled their services. Our parishioners were worried and asked whether we are having the Liturgy today. I was also concerned but we decided to proceed. And see, thank God, we are here and you came to the church. We did not look at the storm but “looked at the ship”, at the Church calling us for Sunday worship. And, as we know, the Church is the Body of Christ, so we should not look at the storm but at Christ”.
“Dear brothers and sisters! In our troublesome life we face many storms. Especially, if we are attempting to lead a pious and spiritual life. Then not only usual cares of life and life problems bother us, but the demons would attack us and tempt us to lead astray. But if we are in the ship of the Holy Church, we can go through those storms. We just have to look at the ship”.
“But if we still have any doubt as we walk this spiritual path, then the troubles and cares of this world overwhelm us. We become preoccupied with the storms that are around us because we lose our focus on God. This is what happened to Apostle Peter when he began to sink. He lost his focus on the Savior and placed his focus on the storm around him. When he did this he lost the grace that was given to him when he stepped out of the boat in faith. This should remind us as our Lord said “without Me you can do nothing” (Jn.15, 5)”.
“We have to keep in mind that sometimes we see what we want to see. Then we either see the real things or we see the things unreal. And sometimes the Lord blesses us, gives us His grace to see things invisible. Today we commemorate Holy Apostle Matthias. He was first one of the 70 Apostles but later he was promoted and became one of the 12 Apostles, taking the place of Judas the betrayer. Today’s second Epistle lesson told us that the Apostles decided to fill the place of Judas, so they elected a disciple to take that place. They had two candidates, casted lots and the lot fell on Matthias. Holy Apostle Matthias was persecuted like all other Apostles. And once his persecutors wanted to seize him but could not because all of a sudden they could not see him. He was there but they were unable to see him. That was the grace of God for St. Matthias to become invisible only for those who wished to take him into custody. Therefore, sometimes we see what we want to see or, on the contrary, don’t see”.
“When we lose our focus on the Lord and get caught up in the storm of temptations around us we have a choice to make. That choice is, do we place our trust in the Savior to help us or do we allow the temptations to overcome us. This is the same choice that St. Peter was confronted with as he was sinking in the water. When we are in this situation we can do two things the first is call out as Peter did “Lord, save me!” or “curse God, and die” (Job 2, 9) as Job’s wife told him in the midst of his afflictions”.
“If we choose to follow St. Peter’s example and cry out “Lord, save me!”, then we will find that the Savior is ready to reach out His hand and pull us out of the storm of temptations just like he did for Apostle Peter in the Gospel. This example shows us that the Lord is always there for us. How can we not see that the Lord is there for us then why do we doubt? It is because we are fainthearted and do not place our trust in the Lord”.
“Dear brothers and sisters! With the remembrance of these examples we should not be given over to despair but should be strengthened in our faith that the Lord will save us so that we can say as the Holy King David said, “In God I have put my trust; I will not be afraid. What can man do to me? Vows made to You are binding upon me, O God; I will render praises to You. For You have delivered my soul from death. Have You not kept my feet from falling” (Ps. 55, 11-13)”.

The choir nicely performed Psalm 33 during preparation for Holy Communion.

After the dismissal of the Liturgy the Rector made some announcements. 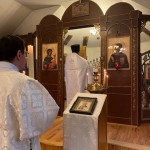 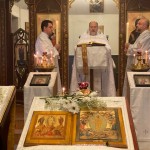 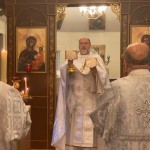 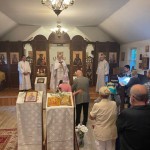