On February 15 the Orthodox Church celebrates great feast of the Meeting of the Lord. On that day we had a nice celebration at St. George Church. Our Rector, Archpriest Igor Tarasov performed the Divine Liturgy.. Following the reading from the Holy Gospel he preached the following homily:

“Dear brothers and sisters in Christ! Today we celebrate great holy day of the Meeting, or Encounter of the Lord. The Epistle lesson assigned for this feast is telling us about the great difference between the Old Testament priesthood and the priesthood of our Lord Jesus Christ. In the event of the Meeting of the Lord we see that Jesus being an infant was presented in the Temple of Jerusalem. By doing this His holy parents fulfilled the command of the Law of Moses. Since Jesus was the first-born Son of His Mother, according to the Old Testament law He had to be offered to God. His parents had to come to Jerusalem, to the holy Temple and to perform a ritual, a sacrifice for Him. This was one of the many commands of the Old Testament law. Other commands anticipated that certain people, only from the tribe of Levi, called the Levites, could be the servers at the altar of the Temple. All the priests and servants of the Lord had to be the heirs of Aaron, the brother of Moses. Thus, there was a special priestly cast among the Jews of old”.
“When our Lord Jesus Christ came into the world, He was born to the family which was not the heirs of Aaron. The Blessed Mother of God and Her spouse St. Joseph were from the tribe of Judah. No one from their tribe could be a priest in the Temple. But we all know that our Lord exercised a power of a priest. He did it by offering Himself as a sacrifice for the sins of mankind when He voluntarily agreed to suffer and die for us. His Holy Passions and His death became a redemptive sacrifice for all of us. Jesus is our High Priest who entered the Holy of the Holies, not of the physical and earthly Temple, but mystically, sacrificing His own blood before God the Father. We may also add that He Himself established the Holy Sacraments, performed the first Divine Liturgy at the Last Supper. Jesus is our High Priest, the highest priest of the New Testament”.
“The contrast between priesthood of the Old Testament and the priesthood of Jesus Christ is described in today’s Epistle lesson. St. Paul teaches that Jesus’ priesthood is “according to the order of Melchizedek” (Heb. 7, 17). The latter was a mysterious figure in the Old Testament. He appears in the book of Genesis as a priest of the High God, and at the same time as the king of Salem (meaning the king of peace). He meets Abraham, then offers the sacrifice of bread and wine, then he blesses Abraham. Abraham is giving him one tenth of his possessions, the tithes (Gen. 14, 18-20). Nothing else is said about this figure. He has no relatives, his birth or death is not mentioned in the Scripture. But we see that he was considered superior to Abraham and to his heirs”.
“Since the Old Testament priesthood of the Temple was limited to the special cast, to the heirs of Aaron, it inferior to the priesthood of Melchizedek. And the priesthood of Christ is like such priesthood. As Melchizedek had no earthly genealogy, so is Christ because He was born of a Virgin. Because He is God who became Man, His priesthood can really change the mankind. At that point, the Old Testament priesthood consisted of mere men, thus it could not really transform mortal and corrupt humanity. Sacrifices of the Levitical priests had to be repeated while the sacrifice of Christ was offered once and for all”.
“St. Paul also convinces the Hebrews that since Abraham met Melchizedek long before the Temple priesthood was established, then the priesthood of Melchizedek is superior to the Levitical priesthood (Heb. 7, 9-11). Jesus arose as a priest according to the order of Melchizedek when He obeyed the law of Moses, but being God, He also transcended the law and established His eternal priesthood”.
“This is why, dear brothers and sisters, celebrating feast of the Meeting of the Lord we are instructed by St. Paul that the ritual performed over the Infant Jesus in the Temple, as well as all other events of this glorious holy day – all these actions show that the new and eternal High Priest, a priest according to the highest order appeared in Jesus Christ. He was born, He was circumcised, He was presented in the Temple. By this He showed His obedience to the law of Moses. But He went further by His death for us. So, He became our High Priest who could make all of us redeemed by His holy and unique sacrifice”.

The choir prayerfully performed festal hymns of the Meeting during preparation for Holy Communion.

After the dismissal the Rector greeted the faithful on the great feast.

Because it was a working weekday, not too many parishioners came to the temple but the service was attended by Deacon Matthew Keil from the ROCOR Synodal Cathedral along with his big family. 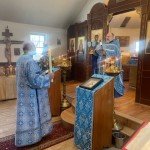 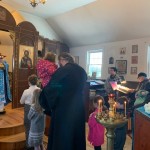 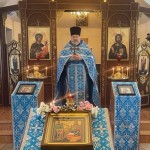