On February 13, on the Sunday of the Publican and Pharisee, the Rector of St. George Church, Archpriest Igor Tarasov served the Divine Liturgy in our parish temple. After the readings from the Sacred Scripture he preached the following homily:

“Dear brothers and sisters of Christ! Today’s reading from the Gospel tells us a parable about two men who went up to the Temple to pray. One of them, who was a public sinner, went home justified. Yet another who was viewed as a just man was condemned. Why? It happened because of their attitudes: the publican had the right attitude. He was asking God for mercy in repentance for his sins of which he was aware. On the other hand, the Pharisee had the wrong attitude. He was not asking for mercy. On the contrary, he was proud and satisfied with himself. He was under the illusion of being righteous. And he had this illusion only because he fulfilled all the outward observances of his religion. His piety was all for show, it was all outward and did not come from his heart. We may say that the Pharisee did the right things, but he did them for all the wrong reasons. Thus, his works were in vain”.
“The error of the Pharisee was to confuse the means with the ends. Our end, or goal, is to find salvation. There are many means to salvation. These means are prayer, fasting, giving alms, receiving the Sacraments, being helpful to other people. However, we should not think that those means to salvation automatically save us, merely because they are outwardly observed”.
“The outwardly observance by itself is necessary. We have to worship God outwardly, not just in our hearts. Moreover, we can worship and pray to God everywhere, but there is one place where we can be particularly close to Him, and where it is easier to speak to Him in prayer. Such place is the holy temple. Only in the temple we have the divine services and most of the Holy Mysteries. Nowadays because of the pandemic many churches were closed for some time and held their services remotely, online. That damaged people’s piety and lowered people’s participation in the services. In the communities that practiced such worship for a relatively long time, many parishioners did not return to the church when their church was reopened. Thank God, many our Orthodox churches did not follow that way and became opened as soon as possible. Yes, you can pray anywhere, you can listen to the divine services on TV or online but it will never substitute your real, physical presence in the holy temple and your real participation in the services. Some progressive pastors and church leaders, even among some Orthodox, even discussed a possibility to partake of the Sacraments online. They permitted to discuss the option to receive Holy Communion remotely. Of course, it is a very wrong thinking”.
“Dear brothers and sisters, today’s Gospel reminds us that the best place for prayer and worship is the holy temple. Both a sinful publican and a seemingly righteous Pharisee came there to offer their different prayers. Therefore, let us not withdraw from the holy church, from the place of grace and blessing”.
“It is though anticipated that many people may say that by attending the church we do the outward observance, just like the Pharisee. During my life I heard a lot of people saying that going to church is not making you a good person, that many of those who attend the church are not so nice in their lives. Thus, we are often accused of being like that Pharisee from today’s parable. It may be true: some people could be like that. But it does not make the holy temple needless. It does not make the Sacraments unnecessary. It does not make the divine grace flowing from the Holy Church a waste. Again, the error of the Pharisee was to confuse those blessed means with the sacred goals. We have to come to church and participate in divine worship with a believing and willing heart, not just outwardly or automatically”.
“The publican had a right attitude because he was sincere in his repentance. His error was in his sins and his lifestyle. But since he was aware of his unworthiness, he was blessed by God”.
“Dear brothers and sisters! Learning from today’s Gospel parable, let us imitate the publican in his repentance and his inner humility and faith. Let us avoid the proud and self-deceptive attitude of the Pharisee. However, let us resemble that Pharisee in his outwardly actions – in his prayers, fasting, giving alms and tithes. But may those outwardly acts be the fulfillment of our inner feelings of piety and love towards God and neighbor. Let us outwardly be like the Pharisee but inwardly be like the publican. Then we will be true worshipers of God, the God who is merciful to us, the sinners and who loves mankind!”

During preparation for Holy Communion the choir prayerfully performed hymns from the Lenten Triodion which begin to be sung on this Sunday, starting with the words “The door of repentance open to me, o Giver of life…”

After the dismissal of the Liturgy the Rector made the announcements regarding future celebration of the Meeting of the Lord and about the next privileged (compact) week. He also congratulated Lilia Snaychuk on her past birthday and proclaimed the Polychronion on her behalf. 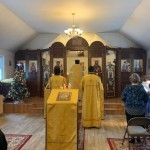 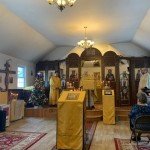 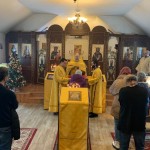