On February 27, on the Meetfare Sunday, Rector of St. George Church, Archpriest Igor Tarasov served the Divine Liturgy in our temple. After the Gospel lesson he preached the following homily:

“Dear brothers and sisters in Christ! This is a disturbing time. The war started in the old country. And in that time we came to the temple to celebrate another disturbing moment, the future Last Judgment. Today is Meetfare Sunday on which we commemorate the end of this world, we reflect upon something which is going to occur at the Second Coming of Christ. Many evil things had happened in the course of human history. Many evil things continue to occur. But at some pint in the future, this world will definitely end. Our Lord Jesus Christ will come in His glory to judge the living and the dead. Today’s Gospel lesson describes that Judgment in a very clear and impressive way (Mt. 25, 31-46). The outcome of that event will be very serious and harsh: some will be blessed and permitted to enter the Kingdom of Heaven while the others will be condemned to eternal torment”.
“Reflecting upon that future that, according to our faith, is certainly awaiting us, let us learn from the words of the Holy Gospel, from the words of the Savior. And His words clearly teach us that we may be saved by performing the works of love – feeding the hungry, giving drink to the thirsty, taking in a stranger, clothing a naked, visiting a sick or a prisoner. And, on the contrary, we won’t be saved if we fail to perform those good works”.
“Dear brothers and sisters, take a heed: Jesus Christ is speaking in a positive way. He does not say that eternal punishment awaits those who did some terrible things – murder, stealing, adultery. Of course, grave sinners may deserve it – that’s for sure. But in today’s Gospel the Lord does not speak about that. He speaks of eternal blessedness for those who do the works of love and mercy. They will join Him in His Kingdom. Then He says that if we lack those deeds, we won’t be worthy to be with Him in eternal life”.
“Many people tend to think that there exist good and evil in the world. They think that both good and evil are equally real and strong. I recently heard that idea from a political leader who is now conducting the war. Such an opinion is erroneous. A number of heresies and false philosophical doctrines stated that. But we, Christians, do not believe in that. We are now talking about Christian philosophy; and usually philosophy is understood as some very sophisticated thing, uneasy to grasp. But our Christian philosophy is, in fact, simple. We believe in God who created the world to be good. And all evil things happening in the world are not really existing. They are real and troublesome, however they lack independent being. If we sin, we lack love or any other virtue. If we do not help the needy, we lack love and mercy – that’s how the evil enters into our life. If we fail to perform the works of love, we multiply evil in the world. Therefore at the end of the world, when our Lord will come to judge us, we will lack salvation”.
“Dear brothers and sisters! Our unworthiness to be with Jesus in paradise will be the outcome of our own lack of love or other virtue. We ourselves will choose that destiny for ourselves refusing to fill our life with the love of Christ. It won’t happen because God is so harsh to judge the sinners or because hell does exist. The Muslims believe that if hell exists, then it has to be filled. No! Hell, all those eternal punishments would not exist at all, if we were not lacking virtues, not lacking love and mercy. But it does exist because of our failure to persist in goodness. And the devil himself, whom we call the evil one, is the prince of darkness and of the universal evil because he, being first created as a bright Angel, made a choice to be against God and to renounce His love”.
“Therefore, dear brothers and sisters, let us make haste to perform the works of love and mercy to prepare for the day of the Last Judgment. Let us remember that on that day all of us will stand before the Lord, and our performance will be appraised. If we attempt to fill our life with good deeds, we may be saved, blessed and invited to eternal life with the Son of God. But if we fail and lack the works of Christian love, we may be rejected and condemned. But again, that condemnation will take place because of our own disposition and attitude. Thus, let us live our lives in such a way that Merciful Lord and the Judge most just number us among the sheep at His right hand and lead us into life everlasting!”

During the Litany of Fervent Supplication the Rector had a petition for the suffering country of Ukraine and its people, as well as a petition beseeching the Lord to spare the faithful from the outbreak of the disease.

Since there were no services for the departed performed on Meatfare Memorial Saturday, the Rector added the Litany for the deceased to the Liturgy with commemoration of those who had fallen asleep.

At the Great Entrance the Rector added a commemoration of the “suffering Ukrainian country”.

The choir prayerfully performed the Psalm 136, “Down the rivers of Babylon” during preparation for Holy Communion.

After the dismissal of the Liturgy the Rector briefly addressed the parishioners with a heartfelt request to pray for Ukraine and for the end of war. Then he made some announcements regarding today’s commemoration of the deceased, about the following compact week of Maslenitsa and our Blini luncheon planned for the next Sunday. He also called the parishioners for more active participation in all our parish events.

Following the service of the Liturgy the Rector performed the memorial Litia requested by one of the new parishioners. 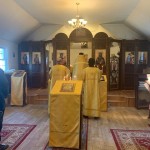 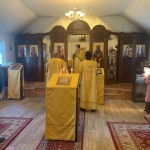 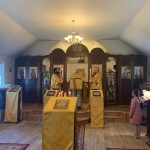 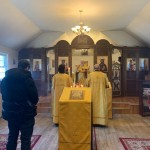 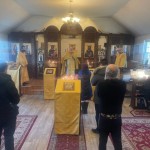 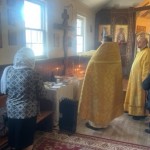