On May 1, on the Sunday of Antipascha, also known as Sunday of St. Thomas, we had a nice service at St. George Church. Our Rector, Archpriest Igor Tarasov celebrated the Divine Liturgy in our temple. He was co-served by Priest Nenad Flora, Rector of St. Seraphim Mission in Punta Cana, Dominican Republic.

Following the Gospel lesson our guest, Fr. Nenad preached a homily in English about celebrated feast.

Following the dismissal of the Liturgy the Rector welcomed Fr. Nenad who used to be our parishioner and is a very good friend of our community of St. George. Fr. Igor also preached a sermon in Russian addressing the spiritual importance of knowing God in the life of every Christian. Holy Apostle Thomas recognized His Lord Jesus Christ seeing His risen body. Very often people learn about God studying the Scripture and Theology but doing that they not always come to the true knowledge of God. Some Romanian priest acknowledged that he came to know God not after he studied in theological schools, but only when he ended up in prison. God reveals Himself to the people in suffering. Nowadays a lot of people suffer terrible things in Ukraine. And if someone wonders where God is in these misfortunes, we may answer that God is truly there, among the suffering people. They can easily know Him. If there is a desire to know God, He will permit to become known. Thomas sincerely wished to believe although he demanded proof. But when the Risen Lord had appeared to him, Thomas forgot about his demand and recognized Him.
The Rector also made an announcement regarding our Patronal feast of St. George which comes soon.
Finally, the Rector distributed the Artos among the parishioners. 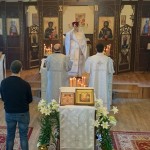 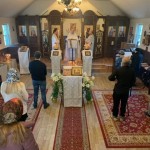 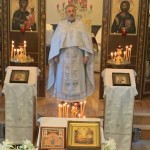 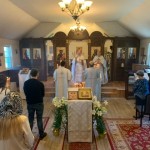