On Friday, May 6 our Parish celebrated its Patronal Feast of the Holy Victorious Great Martyr George. Our festal service was headed by our Rector, Archpriest Igor Tarasov. He was co-served by the guest clergy from the ROCOR: Abbot Eutychius (Dovganyuk), Priest Nenad Flora and Deacon Matthew Keil. After the reading of the Hours they celebrated the Divine Liturgy. Later, during the service there arrived Abbot Zosimas (Krampis) who was praying along with the faithful in the temple.

Following the readings from Sacred Scripture Priest Nenad Flora preached a short homily in English. He stressed that in the Gospel reading appointed for this feast the Lord says, “These things I command you, that you love one another” (Jn. 15, 17). Thus the Lord did not ask or suggest that we love another but He commanded that. Love is a crucial commandment of Christianity and it should be practiced if we wish to attain salvation.

The choir beautifully performed hymns dedicated to St. George, as well as Paschal hymns during preparation for Holy Communion.

After the dismissal of the Liturgy the clergy and the altar servers performed the rite of glorification of St. George in front of his icon in the middle of the church. They sang the troparion, kontakion and magnification of our temple Saint. Then the Rector greeted everybody present on the feast and said a few words about our celebrated holy patron. The two group photographs were taken: one of the clergy and altar servers, then another of all present at the celebration.

Our Patronal Feast continued after the liturgical service. All were invited to a luncheon at the nearby Italian restaurant where the clergy and parishioners enjoyed delicious meals and a nice company. 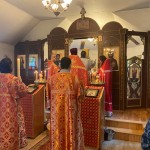 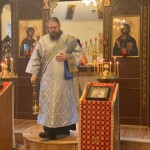 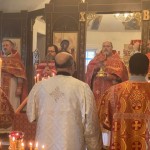 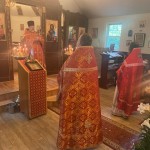 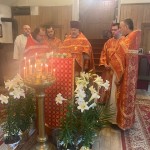 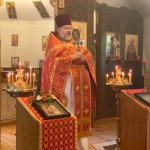 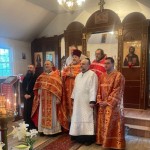 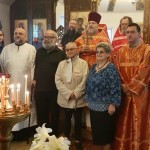 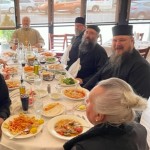 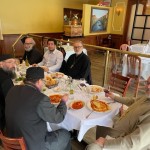