On Thursday, June 2 of this year the Orthodox Church celebrated great feast of the Ascension of the Lord. St. George parish had a nice celebration on this day. Our Rector, Archpriest Igor Tarasov served the Divine Liturgy in our temple. Our friend and neighbor, Deacon Matthew Keil attended the service along with his big family joining a small number of our parishioners who came to the church on a working day.

After the Gospel lesson Fr. Igor preached the following homily:

“Dear Father, dear brothers and sisters! Today we celebrate glorious feast of the Ascension of our Lord into heaven. It has been 40 days after the Resurrection of Christ that He was taken up from the earth to the heavenly abode. All these days our Lord Jesus Christ being risen from the dead kept appearing to His Disciples. He was spending time with them speaking of the Kingdom of God (Acts 1, 3). He was teaching and instructing, granting His blessings and showing them the way they were to proceed. On the 40th day He gathered them and led from Jerusalem to Bethany. Jesus commanded the Apostles not to leave the holy city but to wait for the promised gift, for the Holy Spirit to descend upon them (Acts 1, 4-5). They all were outside of the city, on the Mount of Olives where the Lord ascended. Today’s Gospel says that the Jesus lifted up His hands and blessed the Apostles. It also says, “Now it came to pass, while He blessed them, that He was parted from them and carried up into heaven” (Lk. 24, 50-51).
“Dear Father, dear brothers and sisters! Ascension of Christ teaches us humility. Although the very word “ascension” means some uplifting upon the earth and upon anything inferior, our Lord ascended into heaven only after He lived on earth, endured human life, voluntarily endured His passions and death on the cross. Even after His Resurrection He did not leave the earth and His disciples but stayed for forty days, appearing to the Apostles, spending time with them. When He accomplished His ministry as the Savior of the world, He could allow Himself to leave”.
“Some people act differently. For instance, many people wish to leave their native town to pursue a new life in a big city. If they do so, very often they like to forget about their native place, and may even be ashamed of it. In this way they feel “ascended” and lifted above their past. Such attitude is a pride which may lead them to a failure. Pride always leads to a failure, at least to a spiritual one”.
“Our Lord, on the contrary, reached His Ascension through humility. He humbly led His earthly life and endured temptations, sufferings and His death. Holy Apostle Paul says that Jesus “humbled Himself and became obedient to the point of death, even the death of the cross” (Phil. 2, 8). But that humility and obedience made Jesus highly exalted. It made Him lifted up upon the earth and ascended to God the Father”.
“We have to note that by ascending into heaven our Lord Jesus Christ took both His divine and His human nature. And since He did share our human nature with Himself, it is also our nature that ascended to the heavenly abode of His Father. As St. John Chrysostom wrote, “Now, with awe and astonishment we see that Man sits in the deepest mysteries of the Holy Trinity”. That Man is Jesus. Jesus made our humanity worthy of heaven, accepted in the highest realm of the divine dwelling. That is an important point to remember when we celebrate this glorious feast of the Ascension”.
“Therefore, dear Father, dear brothers and sisters, being aware that in Christ our human nature was ascended into the heavens, ascended collectively – we should also strive for our own, personal ascension. Such personal ascension can be accomplished through humility, through our own endurance of the temptations and different tests, through our own service to God and to our neighbors. We can attain it by being humble and obedient to the will of God. We have to imitate Christ in His love, work and service to others, so our human nature may join Him in heaven. Let us thus strive for that in our earthly life to be worthy of life in heaven, life everlasting and blessed!”

The choir beautifully performed hymns of the feast during preparation for Holy Communion.

After the Liturgy dismissal the Rector and the altar servers performed the rite of Glorification in front of the festal icon singing the troparion, kontakion and magnification of the feast. 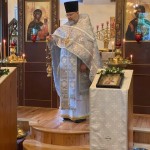 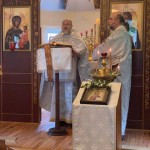 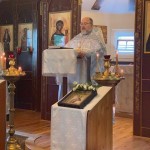 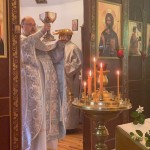 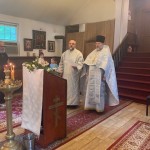 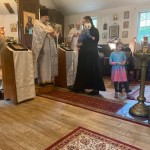