On June 5, on the Sunday of the Holy Fathers of the First Ecumenical Council, Rector of St. George Church, Archpriest Igor Tarasov served the Divine Liturgy in our parish temple. After the reading from the Holy Gospel he preached the following homily:

“Dear brothers and sisters in Christ! Last Thursday we celebrated feast of the Ascension of our Lord into heaven. Today’s Sunday following that feast is dedicated to the Holy Fathers of the 1st Ecumenical Council. This was the first gathering of the bishops from the whole Christian world after a long period of persecutions of the Church. It took place in the city of Nicaea near Constantinople in the year 324 A.D. After three centuries of being persecuted the Church of Christ could live and flourish in the Roman Empire when Emperor Constantine made Christianity the religion of the state. Last Friday we commemorated him along with his holy mother, Empress Helen. So, these holy royals allowed the Church to flourish in their Empire and stopped the persecutions of Christians”.
“It is natural for this time of the year, after we have celebrated the bright Resurrection of Christ and His glorious Ascension after the 40 days – to think Who Jesus Christ really was. Jesus was the Son of God and He also was the Son of Man. Jesus came from heaven but He was born on the earth. Jesus was All-Powerful God who worked miracles but He also was a vulnerable Man who was scourged, bitten and crucified. Jesus was a Man who died but He was also risen on the third day. Being risen Jesus kept appearing to the Apostles and then He ascended into heaven. All these things motivate us to seek the answers Who He was or what kind of nature He had”.
“As it is natural for us to seek an understanding of the Person of Christ, it was also natural for the Christians in the 4th century, after the long years of persecutions, to reflect upon the question Who their Savior was. If some Christians were seeking the sound and correct understanding, others engaged in different speculations regarding Christ and taught about Him erroneously. Such errors we call heresies. It took several centuries for the Holy Church to finally decide on that. It took six out of seven Ecumenical Councils (or we may even say that all seven of them) to reject the heresies and to define all the aspects of the true Orthodox Christian teaching regarding Christ. What we commemorate on this Sunday was just the beginning of those definitions. What we commemorate is the First Council and whom we honor are the Holy Fathers who participated in that gathering”.
“The First Ecumenical Council was in the 4th century. At those times, although the years of tribulations were over, the Church began to suffer from different erroneous teachings, the heresies. They altered the teaching of Christ and tended to spread their false opinions among the Christian people. The most dangerous heresy of that time was the teaching of Arius who refused to recognize the Son of God to be equal to God the Father and who understood Jesus to be inferior to God, to be a creation. This is why the Council was very much needed to condemn that heresy. The Council also adopted the Creed, a short collection of beliefs held by the true Christian Church. That Creed is now a part of our prayers and we sing or recite it at every Liturgy”.
“Today’s Sunday is dedicated to the Holy Fathers of this Council because they continued the works of the Apostles. Today we read the Gospel lesson of St. John containing the Pontifical Prayer of our Lord Jesus Christ (Jn. 17, 1-13). The Lord said this prayer at the Last Supper. He was asking God the Father to preserve His disciples in unity and in truth. He prayed that they may have eternal life which is to know the true God and whom He sent, the Lord and Savior Jesus Christ (Jn. 17, 3). After the Lord ascended into heaven the Apostles awaited for the Holy Spirit to come upon them. And He did descend upon the disciples of the Lord. After that the Holy Apostles began their ministry of making all the nations the followers of Christ. Their work was continued by the bishops of the Church. And the 1st Ecumenical Council showed how important is the role of the bishops, the Fathers of the Church. They were the protectors of faith, the shepherds of the God’s flock, the guards of the Church and the keepers of the truth”.
“Nowadays we also see a lot of heresies. Various false teachings shake the souls of believers and seek to dismiss them from the Holy Church. So now we especially need to pray to the Holy Fathers, that they may guard the Holy Church and each of us from error”.
“The words of Christ the Savior are unerring: “I will build my church; and the gates of hell shall not prevail against it” (Mt. 16, 18). Therefore, dear brothers and sisters, let us adhere to the true teaching of Jesus Christ preserved by the Apostles and by the Holy Fathers in the Church. For we know that those who will follow the teachings of the Holy fathers, will remain firm and steadfast in the Orthodox faith and inherit eternal life promised by our Lord Jesus Christ”.

During preparation for Holy Communion the choir performed the magnification of the Ascension and hymns dedicated to the Holy Fathers of the I Council.

After the dismissal of the Liturgy the Rector greeted our young parishioner Elena Malyshev on the occasion of her past name day, memory of the Holy Equal to the Apostles Queen Helen. Traditional Polychronion was proclaimed and the Theotokian prosphora delivered.

Following the Liturgy Fr. Igor performed the memorial Litia on request of Malyshev family to commemorate Valentina Malyshev of the 1st year of her repose. 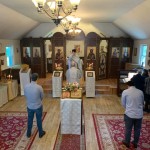 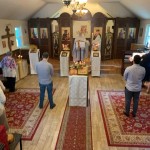 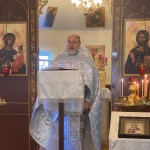 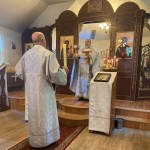 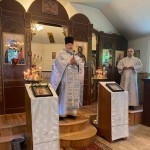 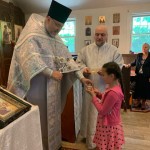