On July 1, on the 5th Sunday after Pentecost, Rector of St. George Church, Archpriest Igor Tarasov served the Divine Liturgy in our parish temple. Following the readings from the Sacred Scripture he preached a homily in Russian.

In his homily the Rector addressed the issue of evil existing in the world. The Gospel lesson of this Sunday tells us about our Lord Jesus Christ casting out the demons from possessed men and permitting the demons to enter into a herd of swine, so the animals perished (Mt. 8, 28 – 9, 1). This shows that evil does exist although the philosophers stress that evil has no substance but it appears as a lack of good. We feel evil’s existence if we are in pain or in suffering. The purpose of coming of the Lord into this world was to fight the evil and to show us the way to avoid it. Sometimes God permits evil to have a moment of triumph. It happened with the demons entering the herd of swine and destroying the animals. It happens with the people also. For instance, it occurred when German nation became overcome by the evil ideas of Hitler. God allows such bad things to happen for certain purposes. It is our task to fight and to avoid evil in our lives, to do good and to seek God’s help in this spiritual warfare.

After the dismissal of the Liturgy the Rector preached a brief sermon in English stressing the thoughts of his Russian homily. He also made some announcements. 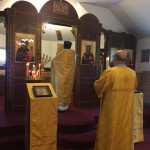 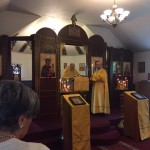 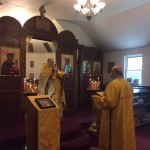 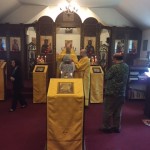