On July 5, on the 4th Sunday after Pentecost we had a nice celebration at St. George Church. Our Rector, Archpriest Igor Tarasov served the Divine Liturgy. After the Gospel lesson he preached the following homily in English:

“Our today’s Gospel reading is about a healing of the servant of the Roman centurion performed by our Lord Jesus Christ. This miracle gives us a lot of thoughts”.
“First of all, the centurion, an officer of the Roman army, was a Gentile, a pagan. But he decided to approach Jesus Christ. And Jesus did not reject his request but desired to visit that man’s house to perform a healing. That tells us that our Lord being sent to the people of Israel, did not wish to avoid other nations in delivering His Holy Gospel. He showed His mercy and concern for the servant of a Gentile officer. And we have read today that the centurion himself showed a great faith in Jesus. The officer had to know that the Jews, especially the Jewish rabbis, whom Jesus was considered, are not usually entering the homes of the Gentiles. So, the officer said, “Lord, I am not worthy that You should come under my roof. But only speak a word, and my servant will be healed” (Mt. 8, 8). So, the centurion showed his humility, his sense of unworthiness, as well as his great faith that Jesus can perform a healing remotely, only by saying a word. He referred to the concept of the authority, to a usual relationship between a superior and those who are under his command. So, he actually professed that Jesus being the Lord for everyone, is able to command from the distance, and His command will be followed”.
“Further we have read that the Lord was marveled by such faith of a Gentile person. Jesus said, “Assuredly, I say to you, I have not found such great faith, not even in Israel! And I say to you that many will come from east and west, and sit down with Abraham, Isaac, and Jacob in the Kingdom of Heaven. But the sons of the Kingdom will be cast out into outer darkness” (Mt. 8, 10). These prophetic words mean that the teaching of the Lord was intended not just for the Jews, most of whom rejected that teaching, but for the multitudes of other nations, for the Gentiles who came from East and West, who converted to Christian faith and who sat down with the Old Testament just in the Kingdom of Heaven. The light of Christ was supposed to shine for all. And now, we who belong to those different nations, became the true sons and daughters of the Kingdom. As Holy Apostle Paul says, now in Christ “there neither Jew nor Greek” (Gal. 3, 28). This is the true unity in Christ which all of us should desire”.
“However, it is now up to those Greeks, Jews, Russians or any other nationality or community either to accept Christ and to follow Him, or to keep Christian faith they once acquired. We know that among ourselves, belonging to the traditionally Christian nations, not everyone is now adheres to that faith. Not everyone is drawn to Christ and following Him. But remember, He said, “Many are called but few are chosen” (Mt. 22, 14)”.
“In our times we are seeing a lot of people living without faith and rejecting the teaching of Christ, so we should not wonder why we are so divided. And we are seeing a great difference, a deep gulf fixed between true Christians and modern secular people. Of course, we are distinguishing between “us” and “them”. Someone may accuse us of being not inclusive or intolerant. But our Lord Jesus Christ Himself said, “Do not think that I came to bring peace on earth. I did not come to bring peace but a sword” (Mt. 10, 34). The “sword” here means separation, not a weapon. It divides, cuts someone off. As in Christ there is neither Jew nor Greek, but we are united, so everyone who is out of Christ is separated from us. Regardless who he is, Russian, Greek or American – if he is out of Christ, he is not with us”.
“Therefore, dear brothers and sisters, in our relationship with God let us imitate the faith and trust of the Roman centurion. Let us cherish our faith and strengthen our hope. Let us be united in Christ but avoid the spirit of those who are out of Christ. Let us be called and chosen to enter and sit down with Abraham, Isaac and Jacob in the Kingdom of Heaven!”

After the dismissal of the Liturgy the Rector preached a short sermon in Russian addressing the ideas of his English homily. He also congratulated a visitor of our parish, a long-term worker of the ROCOR Synod, Inna Shevtsova, on the occasion of her past name day and proclaimed a traditional Polychronion (“Mnogaia leta!”). 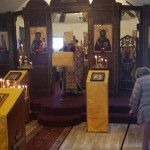 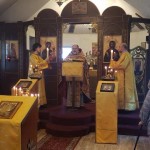 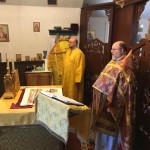