On November 15, on the 23rd Sunday after Pentecost, St. George Church opened its doors after the three-week renovations. Our Rector, Archpriest Igor Tarasov served the Divine Liturgy in our renovated temple.

After the Gospel lesson the Rector preached the following homily:

“Dear brothers and sisters in Christ! The Gospel reading of today shows us again how great was the power of our Lord Jesus Christ. Truly, this was the power of the Almighty God. Jesus is the Son of God, He is all-powerful God Himself. He healed the sick, cleaned the lepers and raised the dead. Today’s reading from the Gospel of St. Luke tells us that He also drove away the evil spirits”.
“God is the only one who has the power over the creatures of the invisible world, over the angels and demons. He created them and He may control them. In today’s Gospel story we hear that the unclean spirits who possessed the poor man in the country of Gadarene feared the Lord Jesus and acknowledged His power. When the possessed man saw Jesus, he cried out and said, “What have I to do with You, Jesus, Son of the Most High God? I beg You, do not torment me!” (Lk. 8, 28). In these words the demons stated that they despise God, but fear Him and that they recognize Jesus to be the Son of the Most High. Further they beg Him not to torment them before such time comes. Jesus casts them out and permits them to enter the herd of swine. Thus the power of evil is not unlimited. God is the only one who has unlimited power, not the devil. In fact, the devil must obey God when God demands it”.
“Our Lord Jesus Christ was a great Conqueror of all evil. He fought any kind of evil things in the life of man: illness, disease, and death. He also fought directly the evil spirits, as it was described in today’s story. Some modern thinkers or scientists may say that the case shown in that story is about mental disease and not about a demonic possession. Our Christian interpretation is just the opposite. We say that every evil thing happening to a man is some kind of demonic possession. Every illness or disease, every pain or suffering, and finally, every death is a result of human condition called sinfulness. And every sin is a slavery to the evil forces. If we commit sins we turn away from God and from the good, we turn to the evil and please the devil. He becomes happy because of that and feels important. A similar thing happens when we become sick or injured. The evil force receives its little victory, maybe for some time. Thus every bad thing in the world is some kind of the devil’s triumph. But such triumph may never last long”.
“Since God is almighty and all-powerful, He has the last word to say. Our Lord Jesus Christ manifested that power of God by fighting the evil things in human life, by crushing the enemies of the human race and by destroying the power of the devil. But He also wishes that we may cooperate with His power and become His co-workers. The man freed from demonic possession wished to do so by following Jesus. He begged Jesus that he may stay with Him. But the Lord gave him another task. He told him: “Return to your own house and tell what great things God has done for you.” (Lk. 8, 39). Jesus elects this person to become the preacher of the Gospel. And we read that the man “went his way and proclaimed throughout the whole city what great things Jesus had done for him.” (Lk. 8, 39)  Thus the man freed from the demons became the first apostle, first successor of Christ for this pagan city, for his countrymen who had no faith in true God”.
“We should also become co-workers of our Lord in doing good things and affirming his almighty power over evil. We may do so by living a Christian life, by trying to please God and by referring to God in all our needs and tribulations. If evil attempts to overcome us by sickness, pain, passion, imperfection, or fear of death, let us turn to the almighty Lord to help us and to destroy the evil forces. Nowadays evil is attacking us by the disease and we are troubled by that so-called pandemic. Many people get sick and some are dying. But let us remember that God has the last word. No matter how bad we feel, let us remember that God is the only one who can really help. No vaccine or medicine can be one hundred percent effective. And no good deed can be one hundred percent effective if we face evil things in our lives. God is the only one who can destroy the evil. He is the only one who may do so. He is the only one who may destroy our enemies and grant us true happiness”.

The choir prayerfully performed Psalm 33 and a hymn in honor of the Most Holy Theotokos during preparation for Holy Communion.

After the dismissal of the Liturgy the Rector greeted the faithful in the renovated church and made some announcements. 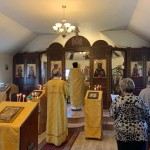 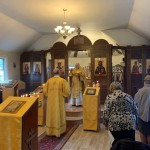 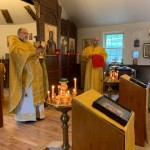 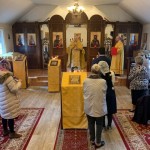 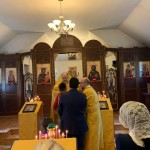 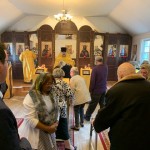