On November 22, on the 24th Sunday after Pentecost, the Rector of St. George Church, Archpriest Igor Tarasov served the Divine Liturgy at our parish temple. After the Gospel lesson he preached the following homily:

“Dear brothers and sisters in Christ! Today’s reading from the Gospel of St. Luke again shows us the divine power of our Lord Jesus Christ. He heals a sick woman and raises a little girl from the dead. Again we see how the Lord was bringing healing and life to the world full of illness and death. So, today we will try to look at the death of the young people, to reflect upon it in some spiritual sense”.
“We all know that an elderly person will die for sure, but a young person may die also. Death is capable of taking a young and healthy girl who could have all life ahead of her in the same way as it may take an aged gray-headed man who has a long life behind him. The children’s mortality is not so high any more in the rich countries as it used to be, but it is still a problem for the poor nations. Children our days still die because of diseases, poverty and starvation. Young people die also because of drugs, crimes and fatal accidents. Any of such deaths looks very cruel, merciless and unreasonable. But what is more troubling is spiritual death of the young generation”.
“In today’s Gospel lesson Jesus came to the house of Jairus whose daughter just died, took the little girl by the hand and called saying, “Little girl, arise”. In the same way our Lord is willing to give a hand to the modern young girls and boys and to tell them to arise from spiritual sleep or death. Many of them are in that state because of the world surrounding them. Today’s children and young people are often born to the parents who themselves do not practice spiritual life, live in sin and away from the life-giving source of divine grace which is the holy Church. Those young people are raised in a spirit of this world. But even if they are growing up in a good religious environment, the world is attacking them all the time. Those attacks come from television, radio, magazines, friends, even from school. In our days we also have computers, the internet. How can you escape all these attacks of the evil influence? You can’t take your children away and live in a wilderness. But even there you would not be immune. A holy elder who lived in the desert once had to visit a city and to take a young monk along with him. Being in the city they encountered a harlot who approached them and said to the elder, “You have been working on this young man for many years to teach him a holy life, but now I can destroy all your work in a couple of minutes!” The elder responded that he believes her because it is much easier to roll down from the hill than to climb it”.
“A strange thing is happening: instead of avoiding evil things we are being drown to them due to their attractiveness. St. Paul described that saying, “What I will to do, that I do not practice; but what I hate, that I do.” (Rom. 7,15). If this is a problem for an adult, how much more difficult it is for children who are tender, inexperienced and spiritually weak? The problem exists because of the sinful state of the humanity. Unfortunately, in our days the very word ‘sin’ is not taken seriously. Meanwhile the concept of sin is very important in any religion. And basic rules of religious morality may be found in any secular ethics. Here we should have a common ground even with those who do not believe in God, but still wish good to our society and to the young generation. But instead of fulfilling the task of proper upbringing of children this society does the opposite. The radio, television, books and internet instead of teaching the youngsters to adhere to the moral norms, teaches how to violate them”.
“Our Lord Jesus Christ is always ready to take the young people by their hands and to say, “Arise”. But He wishes to act through us. We should try to become those hands of Jesus and take those youngsters and bring them to spiritual life. We may argue and say that we often have no control over them and over the whole situation in the world. That’s true. But remember that there is nothing impossible with God. Let us try what we can and able to do, especially as the Church. Sometimes we will succeed and it will appear that the young person is not dead, but asleep. If so, he or she can be risen back to life.”

During preparation for Holy Communion the choir nicely performed hymns in honor of the Most Holy Theotokos.

After the Liturgy dismissal the Rector reminded the parishioners of the beginning of the Nativity Fast which starts next week. This year its beginning falls right after the Thanksgiving Day. Fr. Igor also invited everybody to our parish Thanksgiving luncheon after the service.

After finishing all the services, the Rector and parishioners had a sumptuous luncheon enjoying delicious meals, including the Thanksgiving turkey. 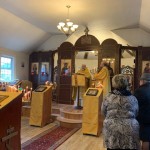 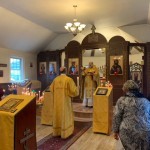 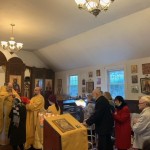 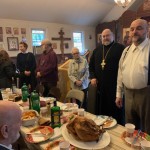