On November 29, on the 25th Sunday after Pentecost, as well as feast of the Holy Apostle and Evangelist Matthew, the Rector of St. George Church, Archpriest Igor Tarasov served the Divine Liturgy in our parish temple. After the readings from the Sacred Scripture he preached the following homily:

During the Litany of Fervent Supplication, Fr. Igor proclaimed a petition beseeching the Lord to spare the faithful from the outbreak of the disease as well as a petition of thanksgiving.

During preparation for Holy Communion the choir nicely performed the Psalm 33 and the hymns in honor of the Most Holy Theotokos.

Following the dismissal of the Liturgy the Rector proclaimed the Polychronion in honor of His Grace, Bishop Matthew of Sourozh who celebrated his name day on this feast of the Holy Apostle and Evangelist Matthew. Then he also congratulated the Suric family on the occasion of their son’s past name day. Fr. Igor greeted little Victor, handed to him the Theotokian prosphora and proclaimed the Polychronion on his behalf. 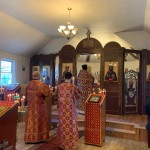 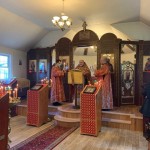 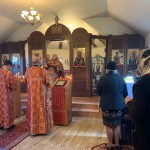 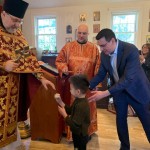