On December 6, on the 26th Sunday after Pentecost, our parishioners gathered at St. George Church for a beautiful celebration. On that day we also observed feast of the Entrance of the Most Holy Mother of God into Temple which had been transferred to Sunday from December 4. Our Rector, Archpriest Igor Tarasov served the Divine Liturgy. After the readings from the Gospel he preached the following homily:

“Dear brothers and sisters in Christ! Today we had two Gospel readings. One of them was pretty brief, telling about a rich man who was a fool because he put all his trust in his possessions rather than in God. He laid treasures for himself, instead of becoming rich toward God. So this is a parable our Lord wished to use to teach us how important is to grow our treasures in heaven, not on earth”.
“Among all kinds of opportunities and privileges a man has in his earthly life is a right to own. We have a right to have property. Some people have a lot in their possession, some people have very few. But we all have an ability and natural right to own things. Those things belong to us although, and we have to realize it, they may not belong to us forever. Either we survive them or they survive us. And if they survive us, we no longer possess them. We are not able to take them along when we die. Thus this right is temporary and it is a gift from God. God gives us such right very generously. And we should see that right as an opportunity to give it away. “The ownership is beautiful only because you can give it away, make a gift, take it off. A man needs to have something in order to have a right and joy to share it, to give it.” – said Archbishop John (Shakhovskoy). Thus the sense of ownership seems to be created to help us to fulfill the God’s will, to help the others”.
“The Teaching of the 12 Apostles says, “You shall share all things with your brother, and shall not say that they are your own; for if you are partakers in that which is immortal, how much more in things which are mortal?” We are not saying here that the right of property should be abolished or all the possessions should be taken and distributed among the others. We went through that if we lived in our old country. Nowadays we fear such tendencies expressed by some left politicians in this country. When you abolish the property, all possessions become owned by the government and you never have a fair distribution. Instead, you have poverty and need. What is the best is if people do possess wealth but they share it with the needy. And what is needed is the right attitude towards the sense of ownership”.
“Unfortunately, such a right attitude is not always practiced. People may often be in a slavery of such sins as greed and avarice. Therefore, our Lord wished to give us a colorful example of how a person with a wrong sense of ownership ends up. He ends up to be called a fool. And, on the contrary, people who had possessions but shared them with others were blessed and are considered wise. They gather their treasures in heaven and get rich toward God”.
“Celebrating today’s feast of the Entrance of the Most Holy Mother of God, we see the Virgin Mary as a little girl brought to the Temple by Her holy parents Joachim and Anna. They were not very rich but heir daughter was the most precious treasure they possessed. And they wished to offer that treasure to God. Most Holy Virgin stayed in the Temple until such time as She Herself will accept to become a temple, Her womb becoming the dwelling for God Incarnate”.
“Of course, children are not property of their parents but they are very dear to them. And for many parents their children are the most precious treasure they possess. Therefore, here is a temptation to have wrong attitude towards that treasure. Very often parents wish the best to their children but they prefer to keep them for themselves and not for God”.
“Our God does not require human sacrifices; He does not demand children to be slaughtered on the altar, as some pagan idols were believed to demand. We recall that in the Old Testament God tested Abraham asking to sacrifice his only son, and Abraham obeyed and was ready to do it. Our Lord Jesus Christ never asked any holy person to sacrifice his or her child. But the Lord wishes us to be ready to dedicate our children to Him. It means to keep them in our faith, to teach them to pray, to bring them to the church. In some instances it means to support their vocation to become a priest or a monk, a nun. But even these little sacrifices are very often avoided. Instead of that children are raised more or less indifferent to faith, to spiritual matters, to the Holy Church. An example of holy parents Joachim and Anna is no longer popular among many parents. But we, Orthodox Christians, should honor and remember those holy people who on this celebrated feast took their little girl, Virgin Mary, and brought Her to the Holy Temple of God, dedicated Her to the Lord, although She was their only child, so dear to their hearts”.
“Dear brothers and sisters! Let us learn to have a right attitude toward the sense of ownership and let us put our trust in God, so any unexpected thing will not find us unprepared, but we will acquire a treasure earned in eternity. Let us admire and imitate holy parents Joachim and Anna in their readiness to serve God and to sacrifice to Him their precious treasure. Let us also learn to sacrifice our time, our works, our talents and anything we possess to God, so we can get rich towards God and join Him and His Blessed Mother in the heavenly glory!”

For the first time of this year the choir was prayerfully performing the pre-Nativity hymns, as well as the hymns of the feast of the Entrance.

After the Liturgy dismissal the Rector and the altar servers performed the rite of glorification in front of the icon of the feast. Then Fr. Igor greeted our young parishioner and altar server, Anton Malyshev, on the occasion of his 18th birthday and wished him to preserve faith and piety he was taught in our parish, to keep those virtues in his adult life expecting him. Traditional Polychronion (“Mnogaia leta!”) was proclaimed. 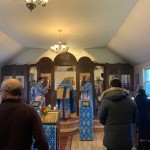 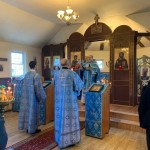 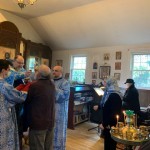 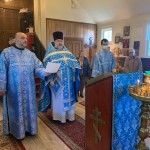 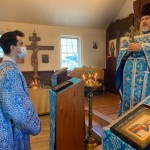 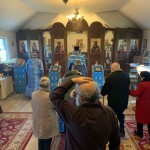