On December 13, on the 27th Sunday after Pentecost, feast of the Holy Apostle Andrew, St. George Parish family had a beautiful celebration in our temple. Our Rector, Archpriest Igor Tarasov served the Divine Liturgy. After the Gospel lesson he preached the following homily:

“Dear brothers and sisters! Today’s Gospel lesson tells how our Lord Jesus Christ healed a sick woman who was bent over for 18 years. Again, our Lord shows His great and life-giving power, the power of God. But we should also note the reaction of certain people to the manifestation of that power. Instead of recognizing Jesus as the Lord and Savior, the leaders of the Jews try to find any possible fault in Him. In this case they are angry that He performed a healing on the Sabbath day. Jesus responded to such accusation and named His accuser very accurately. He called him a hypocrite”.
“Our Lord Jesus Christ always addressed the problems in a proper way and named the things accurately. He never used diplomatic ways to express His feelings. The so-called “political correctness” was foreign to him. Nowadays people are fed up with political correctness: you cannot call things or people the way they are. You are expected to twist your language and invent the false words and be hypocritical. Unfortunately, that dictate is not ending but, on the contrary, it seems that we will see more and more of that falsehood in our society. But Jesus called the things how they are and avoided lie and hypocrisy. On the contrary, hypocrisy was the tool of His enemies”.
“Therefore, today’s Gospel may teach us to avoid the hypocritical attitude. That attitude was very much followed by the Pharisees and scribes, other leaders of the Jews who wished to appear very pious, worthy and virtuous but very often led a different kind of moral and private life. They said very good words but were doing evil things. This is called hypocrisy. Our Lord very often suffered from their attacks, accusations and criticism. And He responded to those attackers very often. The holy Gospels are full of Jesus’ chastising the scribes and Pharisees. Those words are commonly used along with the word “hypocrites’. Later on in many European languages, languages of the Christians the very word ‘Pharisee’ became a synonym of the word ‘hypocrite’. Jesus also called them the “fools and blinds”,“foolish ones” (Lk. 11, 40), called them “the cups clean outside, but their inward part is full of greed and wickedness” (Lk. 11, 39) called them “whitewashed tombs which indeed appear beautiful outwardly, but inside are full of dead men’s bones and all uncleanness” (Mt. 23, 27). Jesus warned His Disciples from the “leaven of the Pharisees which is hypocrisy” (Lk. 12, 1)”.
“The holy Disciples of Christ followed their divine Teacher in everything, including the attitude of Christ against hypocrisy. They were sincere and open; they were humble and simple, and they were able to convert many nations. Today we celebrate memory of the Holy Apostle Andrew the First Called. St. Andrew was one of the 12 Apostles, the brother of Apostle Peter. He was one of the first Disciples who began to follow Jesus, thus he acquired a name of the “First Called”. The Gospel tells us that when Andrew and John asked Jesus where He lives, the Lord told them, “Come and see”. Thus Jesus Christ did not hide His life to others, He was open and sincere. And the Apostles acted in the same way. Holy Apostle Andrew preached the Gospel in the countries around the Black and Mediterranean Sea. He is believed to visit the lands of Rus’ and to bless the hills of the future city of Kiev. Being in the lands of the barbaric tribes in Asia Minor (today’s territory of Turkey) he was in danger of being martyred for Christ. The savage people were ready to seize and kill St. Andrew, however they saw his humble, simple and sincere attitude and their hearts became softened. They did not hurt the Apostle and many of them converted to Christ. Later, St. Andrew died as a Martyr in the Greek city of Patras. He was crucified on a cross shaped in a form of the letter X which we traditionally call the St. Andrew’s cross. But before that he lived and preached about 30 years manifesting a simple, open and humble way of life, an attitude of Christ, an attitude free from hypocrisy and falsehood”.
“Dear brothers and sisters! Let us not follow the way of the Pharisees and hypocrites, but remember things which are really great and important. Let us beware of the hypocritical attitude, the leaven of the Pharisees. Remember that hypocrisy begins when a person is not doing good works, but only shows a likeness of such works. Then such a person may wish to confirm his image of a benefactor without doing a charitable work, or having a personal profit from that charity. If such things are practiced and planned, we are dealing with a hypocrite whose heart is filled with lie and deceit. Good things must be done sincerely, from the heart, for the glory of God and without thinking of people’s reaction. Our Lord Jesus Christ wished to help the sick woman on the Sabbath day and did that good and worthy thing without considering what others would say about it”.
“Dear brothers and sisters! Let us imitate Him and not His enemies, let us imitate His holy Apostles to be worthy of His Kingdom!”

The choir prayerfully performed the magnification in honor of the Holy Apostle Andrew, as well as hymns from the Nativity Canon.

Following the dismissal of the Liturgy the Rector greeted our Sacristan and altar server, Andrew Malyshev on the occasion of his name day. Fr. Igor pointed out that Holy Apostle Andrew was named the First Called not only because he was one of the first Disciples of Christ but also because he was the first who called the others to follow Jesus. He said to his brother, Peter that they have found the Messiah. This should be kept in mind celebrating this Saint and having him as a patron. Traditional Polychronion (“Mnogaia leta!”) was proclaimed. 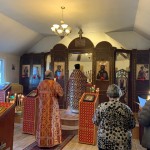 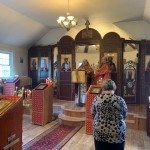 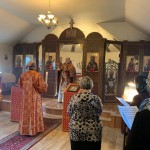 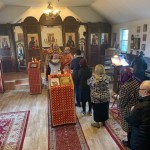 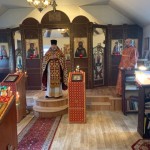 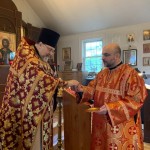