On December 20, on the 28th Sunday after Pentecost Rector of St. George Church, Archpriest Igor Tarasov served the Divine Liturgy in our parish temple. After the Gospel reading he preached the following homily:

“Dear brothers and sisters in Christ! Today’s Gospel lesson tells us about ten lepers who were healed by our Lord Jesus Christ. We heard that only one of them came back to Jesus to give thanks. Other nine did not show any sign of gratitude. Thus today we should speak about gratitude or thanksgiving”.
“When we obtain something which is good for us, it is expected that we are grateful for such a favor. This is a natural way of responding to a good done for us. People are expected to be thankful for small favors. And, of course, we should really appreciate greater things done for our benefit. But, unfortunately, gratitude is not practiced all the time and by everybody. For that reason our Lord Jesus Christ pointed out to His disciples that only one out of ten lepers who were cleaned came back to thank. He wished to teach us to be grateful”.
“Thinking of those ten miserable people suffering from the leprosy, a terrible disease, considering their pain and their loneliness, because they were outcasts of the society, we should understand how great was the blessing that our Lord granted them. He healed them from that terrible illness, He cleansed them from that shameful condition, He restored their health and their status in the society. Therefore, we should be surprised and very disappointed after hearing that most of them, nine out of ten, did not come to give the Lord thanks. Jesus also showed the same feelings. He asked: “Were there not ten cleansed? But where are the nine?” (Lk. 17, 17). The Gospel tells us that the one who did give thanks to the Lord was a Samaritan, a foreigner, if not an enemy of the Jews. Why the other nine did not show a natural sense of gratitude, and only one foreigner and outcast did?”
“Wondering about that we may remember that even animals can be grateful for the good things people do to them. St. Gerasimus who lived in the desert near Jordan, once met a lion who had a splinter in its paw. The animal was wounded and suffered. It looked at the Saint and seemed to be begging for help. St. Gerasimus took the splinter away from the paw, washed and bandaged the wound. He left the lion, but the animal followed him to the monastery. The grateful animal spent the rest of its life near the Saint being a guardian of the monastery and even carrying the water instead of a donkey. After the holy elder died, the lion became very sad and died soon beside his grave. Thus this animal acted better than those nine men who were healed by the Lord Jesus, but did not offer thanksgiving. It seems that they should have remained sick; their misery was better for them than happiness. Their healing made them forget their direct duty to give thanks”.
“But we should leave those nine cleansed lepers alone and ask ourselves whether we are not like them? And if we will be honest with ourselves, we would acknowledge that sometimes we aren’t better. If we look around, we should see that we enjoy many blessings given by God. The first gift is our own life. God called us to existence. If not His will we would not exist at all. And nothing in our life is independent from God. “In Him we live and move and have our being”, says the Scripture (Acts 17, 28). Since we believe and confess that God is the Source and Giver of life and of all goodness, we should be always grateful to Him for the different generous and abundant gifts He is bestowing upon us. And since now we are approaching celebration of the Nativity, we may recall that one of God’s most precious gifts to us is the gift of Himself being born for us. God became Man, was born in a cave of Bethlehem as a gift of our salvation! And we must appreciate such а gift, we have to be grateful for it. But we often take those God’s gifts for granted or even forget them. If we are accustomed to say ‘thank you’ for very small, very trivial things, why are we not giving thanks to God for all His blessings, for our life itself?”
“Dear brothers and sisters! Let us follow the steps of the grateful Samaritan and let us, in our thoughts, fall down before Christ, giving Him praise and thanks for all His mercies bestowed upon us sinners. Let us be thankful to God for everything!”

The choir prayerfully performed the Psalm 33 and well as hymns from the Nativity Canon during preparation for Holy Communion.

Following the dismissal of the Liturgy Fr. Igor handed the presents from St. Nicholas to the parish children. 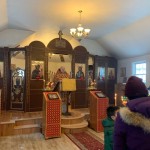 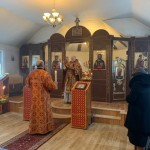 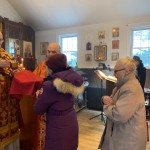 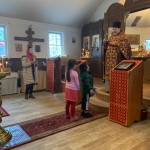 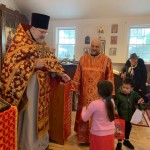 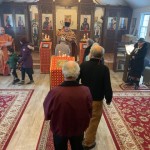