On December 27, on the Sunday of the Holy Forefathers, Rector of St. George Church, Archpriest Igor Tarasov served the Divine Liturgy in our parish temple. After the Gospel lesson he preached the following homily:

“Dear brothers and sisters in Christ! Today’s Sunday is dedicated to the Forefathers of the holy faith and to all the Saints of the Old Testament. This time of the year when we are living in spiritual expectation of the Birth of Christ, we commemorate a number of the Old Testament prophets. For instance, on December 30th we are celebrating memory of the Holy Prophet Daniel and the Three Youths. They were the confessors of faith of the Old Testament. But we also have this special Sunday glorifying these people altogether”.
“In the 6th century before Christ the holy city of Jerusalem was taken by the Babylonian king who captured four noble Jewish young men: Daniel, Ananias, Azarias and Mishael. They were brought to Babylon where the king wanted them to become his servants. They were supposed to adopt the local customs and language. So, it became a time of a great test for their faith in one and true God. When the king ordered them to be fed from his own table, Daniel did not wish to eat the unclean food and convinced the king’s official to give them all, him and the 3 youths, just fruits and vegetables. After ten days the Jewish captives looked better than the ones who ate the king’s food”.
“This example from the Sacred Scripture of the Old Testament is telling us how good could be fasting and abstinence from unhealthy food. In our days, people like different kinds of diets and ways of losing weight. There are made up special systems of nutrition, different kinds of diets which are supposed to make a person healthier. But more often these are the strives of vanity, aiming to make the body more beautiful, or a tribute to a fashion, or in a better case, a desire to strengthen one’s health and make one’s earthly life longer. But Sacred Scripture gives us a simple recipe of a healthy life. It tells us that a self-rejecting and voluntary fasting of the holy Youths, a refusal to eat the unclean food was beneficial for their body and made their health stronger. More than that, that abstinence stimulated their mental and spiritual abilities. Therefore, moderation in food in combination with faith and with a desire to please God may always be beneficial for a person. This is our Orthodox understanding of fast as a saving abstinence from excessiveness and not just simple refusal to eat certain food, as it happens with most of the modern diets”.
“This Old Testament example also tells us that you can preserve your faith even in difficult circumstances. The holy Youths did.  They were made servers at the Babylonian king’s court. Once the king ordered to erect a huge idol made of gold and commanded all his subjects to worship that man-made image. The three Youths refused to do it because they kept the true faith in one God. The king got very angry and ordered them to be thrown into a fiery furnace. But a great miracle happened: the three young men were protected by God, and the fire and heat did not harm them. This is an example of the true confession of faith shown by those three youths. In a mystical way those three Youths were the prototype of he Holy Trinity, as well as of the virginal conception and birth of the Son of God by the Holy Virgin. This is one of the examples of the faith of the holy people who lived before the Birth of our Lord Jesus Christ and who were confessing the true faith in one God and were expecting the Messiah, the Son of God to come into the world”.
“We are now living in a time of the expectation of the Christ coming too. Now we are preparing for the great feast of the Nativity. We buy presents, adorn our homes and churches before this holy day. We also live in a time of the expectation of the second coming of our Lord Jesus Christ. We do not know the time of that coming, but we believe that it is going to happen. This state of expectation demands us to be faithful to Christ. He became the Author and Finisher of faith, as St. Paul says (Heb. 12, 2). All the faith of the Holy Forefathers, the patriarchs, kings and prophets of the Old Testament was completed in Him. He is the Son of God who initiated the faith and He is the Savior who perfected and completed it. All the time of the holy people of the Old Testament was spent in expectation for the first coming of Christ and in preparation for that coming, for the wonderful appearance of God in the world which started by His Birth in the manger in Bethlehem. Now, being Christians and living after that coming, being the Church of the New Testament, we have to keep, cherish and preserve our faith”.
“It is not easy to preserve Christian faith in today’s world. The sin ensnares us so easily, as St. Paul says (Heb. 12, 1). But it was not easy for Daniel and the three holy Youths also. But they did endure. It was not easy to preserve our faith in our old country the times of persecutions, in the times of Communism. But our parents and grandparents did. And they endured. In our difficult modern times in this country we can also endure and preserve our faith”.
“Therefore, dear brothers and sisters, let us listen to the Holy Apostle Paul and “since we are surrounded by so great a cloud of witnesses, let us lay aside every weight, and the sin which so easily ensnares us, and let us run with endurance the race that is set before us, looking unto Jesus, the author and finisher of our faith” (Heb. 12, 1-2)”.

The choir beautifully performed the hymn “O Most Gracious Queen” in honor of the Most Holy Theotokos and the odes from the Nativity Canon during preparation for Holy Communion.

Following the dismissal of the Liturgy the Rector made some announcements and mentioned the coming secular New Year celebration pointing out that we need to be grateful for God’s mercy and love which allows us to live for another year. He also spoke regarding proper behavior in the church during important moments of the Divine Liturgy. 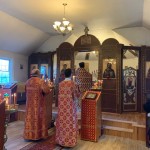 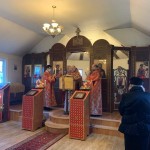 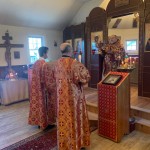 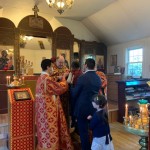