On February 23, on the Meatfare Sunday our parish had a liturgical celebration in the temple. Following the readings from the Sacred Scripture St. George’s Rector, Archpriest Igor Tarasov preached a homily:

Due to the great concern for the situation in Ukraine special petitions for the multiplying of love and for the eradication of discord and hatred were added to the usual Litany of fervent supplication of the Liturgy.

A Litany for the deceased was also offered during the Divine Liturgy because our parish did not have any service for the departed on the Memorial Meatfare Saturday. Along with usual commemoration of all Orthodox Christians we commemorated the souls of those who were killed during the strife in Ukraine.

At the end of the Liturgy Fr. Igor offered a special prayer for the Ukrainian people and for the pacification in Ukraine.

Following the Liturgy dismissal the Rector read the Letter from His Holiness, Patriarch Kirill calling for a fervent prayer for the multiplication of love on the lands of Ukraine. The Rector also advised the parishioners that His Eminence, Archbishop Justinian also issued a special letter about this issue. The Archbishop’s archpastoral recommendation to all of us in the Patriarchal Parishes is to abstain from any political discussion in the temple and to limit our mentioning of Ukraine to our fervent prayers.

After the Divine Liturgy the Rector performed a Memorial service which included commemoration of all Orthodox Christians, the victims of the strife in Ukraine and also the deceased relatives of the Kay family that requested such commemoration.

Our celebration was concluded by the coffee hour at which the Rector and parishioners enjoyed delicious meals and a nice company. 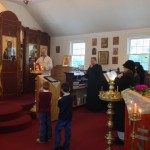 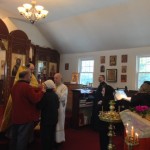 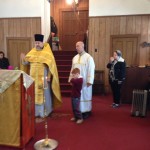 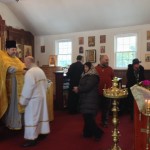