On March 29, on the Fifth Sunday of Lent, Rector of St. George Church, Archpriest Igor Tarasov served the Divine Liturgy in our temple. Following the readings from the Holy Gospel he delivered a homily in Russian. An English version of that homily is as follows:

“We have come to the Fifth Sunday of the Great Fast. It is dedicated to commemoration of the Venerable mother Mary of Egypt, a holy woman who is an example of how a person can change his or her life. St. Mary of Egypt started her adult life as a harlot, a lose woman in the great city of Alexandria in Egypt. But some day when she happened to come to visit Jerusalem, she experienced a strange feeling: some unknown force prevented her from entering the holy church. Mary understood that it happened because of her sinfulness, she converted, she turned her life around. The rest of it she spent in the desert, living in the wilderness, repenting her sins. For many years no one knew about her. Only some time before her death she met a priest-monk whose name was Zosimas. He was astonished seeing such a great ascetic. He first was not able to recognize what kind of being she was – a human or some ghost. Then he was amazed by her life and ascetic endeavors. St. Mary asked him to meet her again in one year and to bring her Holy Communion. They met again and Zosimas gave her Communion. Soon after that Mary fell asleep in the Lord and a year after Zosimas discovered her uncorrupted body.”
“Many times we can hear that people don’t change. In English we say, “Leopard cannot change his spots”, and in Russian we say, “Горбатого могила исправит”. Venerable Mary of Egypt is a perfect example of how the human life may be changed in Christ, with the assistance of God’s grace. Being a harlot, leading a licentious life, Mary changed and spent the rest of her years in repentance, in a very simple way of life, in constant prayer and fasting. She is also a reminder that there is no sin that cannot be cleansed by sincere repentance.”
“Today’s first Gospel reading tells us about our Lord Jesus Christ predicting His holy Passions and death. In this way on this Sunday we should be prepared to spiritually revive the events of the sufferings of our Savior. We also heard that two of His disciples, James and John, asked their Master for a favor. They wanted to be given the honorable places, the important positions in the Kingdom of heaven. Our Lord pointed out to them that their attitude is wrong. He said that in His Kingdom, in order to be great one must be serving others, and whoever desires to be first should be a slave of all (Mk. 10, 43-44). In other words our Lord proclaims some different social order according to which greatness and leadership consists of serving. Again, we hear some interesting, maybe surprising things. Holy Gospel is full of such surprises. When we read it we learn that a publican becomes justified, a prodigal son becomes forgiven, a harlot gets the remission of sins. Whoever humbles himself will be exalted, and the last will be first.”
““Behold, I make all things new” – said the Lord (Rev. 21, 5). This is why His teaching is called the New Testament. And according to the New Testament God becomes united with humanity, redeems it. He becomes the Son of Man who comes “to serve and to give His life a ransom for many” (Mk. 10, 45). In this new reality of salvation the sick are healed, the blind see, the lepers are being cleaned, the dead rise. And the sinners become forgiven. A woman in today’s Gospel who had many sins becomes forgiven “for she loved much.” (Lk. 7, 47).  St. Mary of Egypt after being also very sinful becomes not only forgiven but blessed with holiness for her sincere repentance and reformed life.”
“Today’s Sunday should teach us to be the right followers of the New Testament, the disciples of Christ who expect to enter into His Kingdom and to take the places which God prepared for us. In order to be worthy of those places, let us serve one another. And if we stumble, make mistakes or commit sins, let us remember that it is not desperate. Any person is able to change his or her life. If we sincerely repent and turn away from those sins, as holy Mary of Egypt did, God will forgive all of them and will bless us, bestow upon us His grace and will invite us to His Kingdom giving us the honorable and desirable places in the eternity.”

After the Liturgy dismissal the Rector preached a short sermon in English to stress the main ideas of his Russian homily. 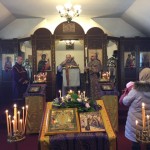 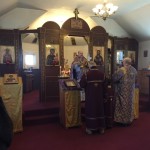 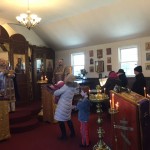 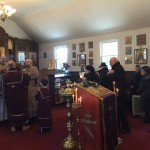 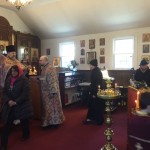 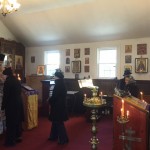