Our Rector, Rev. Priest Igor Tarasov stayed a couple of days in Kiev, Ukraine after his finals at the Academy. On Friday, February 25 he unofficially participated in the welcome meeting held at the Kievan Metropolia for the group of American agricultural professionals who visited Ukraine. Guests from the United States had an opportunity to visit the Kiev Cave Monastery and to meet with the Ukrainian Church officials. The meeting was headed by Archpriest Nicholas Danylevych, the Vice-Chairman of the Department of the External Relations of the Ukrainian Orthodox Church. Fr. Igor was present and assisted in translation. He also had a chance to speak with the American visitors and to tell them about Orthodoxy in America, as well as about his own parish in Bayside. A lady from California asked Fr. Igor about the differences between Orthodoxy and Roman Catholicism. He named some of them, including Catholic view on the primacy of the pope, some new dogmas adopted by Roman Church and mandatory celibacy of the priests. American guests were very impressed by the beauty of the Orthodox churches and by the religious zeal of the people of Ukraine who preserved their faith during persecutions of the past years.
On Cheesefare Sunday, February 26, Fr. Igor served the Divine Liturgy at St. Spyridon’s Church in Kiev. He assisted Fr. Nicholas Danylevych who is the Rector of that temple located at one of the neighborhoods of the Ukrainian capital. The temple itself was built last year. At the Liturgy Fr. Igor preached a sermon. He reminded faithful of the importance of fast because fasting was established by God already in paradise for the first people, Adam and Eve. Since on that day the Church commemorates the expulsion of Adam from paradise, we should remember that a return to the lost state of blessedness is possible only through the spiritual efforts of fasting, prayer and charity assisted by God’s grace. Therefore, we need to consider the advices given in the Gospel reading of Cheesefare Sunday. The Lord gives us three “recipies” for Lent: forgiveness, fast and gathering our treasures not on earth, but in heaven.
Following the service Fr. Igor joined clergy and active parishioners of St. Spyridon’s at the luncheon. 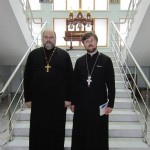 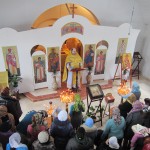 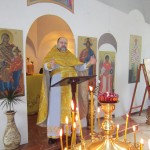 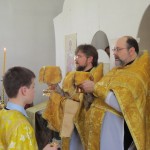 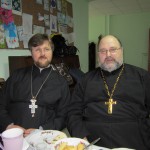 On February 26, on the Cheesefare Sunday our parishioners gathered for the services at St. George’s Church. The Divine Liturgy was celebrated and followed by the Vespers with the Rite of Forgiveness. In the absence of our Rector services were performed by Rev. Hieromonk Stephen (Bushman).
A traditional Blini Lunch was held after the church services. Parishioners and Fr. Stephen had a nice opportunity to enjoy delicious Russian meals and a good company.

On February 20-24 our Rector, Rev. Priest Igor Tarasov was in Kiev, Ukraine to continue his theological education. He studies at Kievan Theological Academy, the most ancient religious school of the Russian Church founded in 17th century. It is presently located at the Kiev Cave Lavra, a very revered and holy place, a cradle of the Russian monasticism. At the Academy Fr. Igor took final exams of the second semester of his third year of studies. Fr. Igor also had an opportunity to visit the holy places at the Kiev Cave Lavra.
After a successful taking of his exams Fr. Igor was asked to perform a rite of blessing of the newly purchased vehicle. A nice local man named Yuriy who is often driving Fr. Igor in Kiev was very happy to get his new car blessed at the holy place of the Kiev Lavra and by a priest from a remote America. 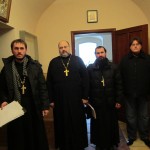 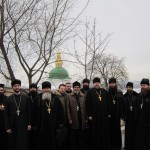 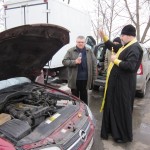 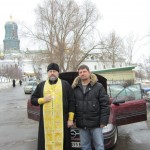 On February 15 Russian Orthodox Church celebrates a great holy day of the Meeting of the Lord. Priest Igor Tarasov served the Divine Liturgy at St. George’s Church. In his sermon after the reading from the Gospel, he preached about the meaning of this important feast.
He said: “The history of salvation may be called the history of the meetings with the Lord, the history of our encounters with our God and Creator. Thus, the name of today’s feast sounds very meaningful. We celebrate a meeting of our Lord with Himself in His Temple. We also celebrate a meeting of the elder Simeon with his Savior. When righteous Simeon took the child Jesus into his arms, a new era began; the era of the meeting between God and His children”.
Fr. Igor also stressed the importance of being prepared to meet the Lord. “We all know that our meetings with the Lord can take place every time when we participate in the Church services, especially in the Divine Liturgy. However, such meetings do not happen for many, even if they come to the temple. Why? Because they come unprepared, destructed or unworthy. Even if they think that they may get something out of their visits to the church, such thoughts may be in vain. For instance, if the people come to the church just to light a candle and then leave, they do not get much out of their visit. An encounter with the Lord does not take place,” he said.
Fr. Igor concluded his sermon with the following words: “Let us imitate the holy people like righteous Simeon and Anna the prophetess… and await our meeting with the Lord, let us be prepared for it, so our expectations will not be in vain.”

Annual Parish Meeting of St. George’s Church was held on Sunday, February 12, following the Divine Liturgy. Most of the parish members were present at the meeting and the Rector, priest Igor Tarasov presided. Church Warden, Olga Roussanow read the minutes of the last Annual Meeting held in 2011. Parish Treasurer Vera Koretz reported on financial situation. She informed that parish income from the year 2011 was higher than in the previous year, and that we had a surplus. Introducing of the special collections for building and ground maintenance was commended. Some other parish issues were discussed, among which a possible replacement of the carpet and setting up of the new heating system.
Same persons were elected for the leadership positions in the Parish. Olga Roussanow was re-elected as the Church Warden and Vera Koretz as Treasurer. 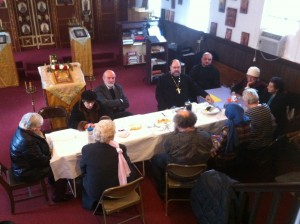 On February 12, on Sunday of the Prodigal Son priest Igor Tarasov served the Divine Liturgy at St. George’s Church. On that day the Church also celebrated feast of the Three universal Hierarchs and Teachers, Basil the Great, Gregory the Theologian and John Chrysostom.
Following the Gospel lesson Fr. Igor lectured on Divine Liturgy. This time he described the importance of the Gospel reading, instructed on how faithful should behave at such an important moment of the Liturgy. Walking around, lighting candles is inappropriate when you listen to the Gospel. A proper position is to stand, listen attentively and to bow your head a little.
At the end of the service Fr. Igor said a couple of words about the feast of the Three Hierarchs.
“Introduction of the feast to honor those three Saints together was to overcome a division which took place among the Orthodox. Each group argued that one of these Hierarchs was greater than others. Thus all the three appeared in a dream to a bishop to proclaim that they are equally honored in heaven. This teaches us not to divide, not to create a party or a group within the Church. Orthodox Christians should not argue that their parish, their priest, their bishop or their particular jurisdiction is better. We may like our own more but we cannot claim that other Orthodox are worse. We cannot divide the Body of Christ which is the one Church,” – said Fr. Igor. 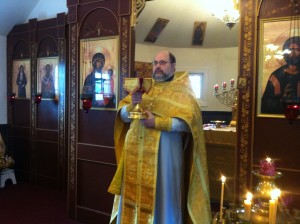 On February 5th, on Sunday of the Publican and Pharisee, the Church celebrated Synaxis of the New Martyrs and Confessors of Russia. Priest Igor Tarasov served the Divine Liturgy at St. George’s Church followed by a memorial service (litia) for the deceased who fell asleep during the time of godless persecutions of Christian faith in Russia.
After the reading of the Gospel Fr. Igor continued his lectures on Divine Liturgy. He spoke about the ceremony of the Little Entrance, about the singing of the Troparia, Trisagion hymn, as well as Epistle reading. After serving the litia Fr. Igor had a short sermon about the New Martyrs and Confessors of Russia. He stressed that we should watch out to avoid being deceived by the evil forces as many of our ancestors became deluded by the false ideals of building a paradise on earth without God. They lived in a state called prelest by the holy Fathers, a spiritual delusion to which the people of Russia were drawn by the deceptive promises of the Communists.
Parishioners enjoyed some fellowship at the trapeza following the services.