On Monday, December 19, the feast of St. Nicholas the Wonderworker, the Administrator of the Patriarchal Parishes in the USA, His Grace, Bishop John of Naro-Fominsk led the Divine Liturgy at St. Nicholas Patriarchal Cathedral in New York. His Grace was co-served by our Rector of St. George Church, Archpriest Igor Tarasov, Chancellor of the Patriarchal Parishes in the USA and by other clergy of the Patriarchal Parishes and the ROCOR. Our Parish Warden Olga Roussanow also attended that service.
At the Little Entrance, for their dedicated service to the Holy Church, Bishop John awarded clerics of St. Nicholas Cathedral, Priest Mark Rashkov the right to wear the gold pectoral cross, and Deacon Yulian Ryabtsev the right to wear the double orarion within the Patriarchal Parishes in the USA.
After the Cherubic Hymn, Bishop John ordained cleric of the cathedral, Deacon Dmitrii Schieffler to the Holy Priesthood.
At the conclusion of the Liturgy, His Grace and the clergy served a short moleben before the icon of St. Nicholas. Afterwards, Bishop John preached a sermon, expressed his gratitude to the clergy who came to celebrate the Patronal feast, and congratulated Priest Dmitrii with his ordination.
Interaction between the clergy and faithful continued over a festal meal in the cathedral refectory. 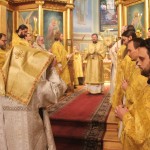 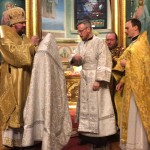 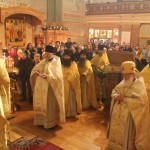 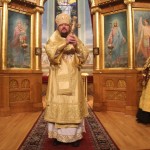 On December 17, on the 28th Sunday after Pentecost, we had a beautiful celebration at St. George Church. On that day the Church commemorates Great Martyr Barbara and Venerable Father John of Damascus. Liturgical service was led by our Rector, Archpriest Igor Tarasov. After the Gospel lesson of the Divine Liturgy he preached the following homily in English:

After the dismissal of the Liturgy the Rector preached a short sermon in Russian conveying the ideas of his English homily. He also congratulated our Sacristan and altar server Andrew Malyshev on the occasion of his past name day wishing him God’s blessings, a warm intercession of Holy Apostle Andrew, great success in his service to the Church and many happy years. A traditional Polychronion (“Mnogaia leta!”) was proclaimed.

Following the Liturgy the Rector performed a Memorial service (Litia) requested to commemorate the deceased members of the Malyshev family.

On December 10, on the 27th Sunday after Pentecost, Rector of St. George Church, Archpriest Igor Tarasov served the Divine Liturgy at our parish temple. On that day the Church celebrated feast of the Icon of our Lady of the Sign. The Rector preached a homily in Russian following the reading from the Holy Gospel.

In his homily the Rector interpreted the Gospel lesson assigned for this Sunday (Lk. 8, 10-16). He stressed that the woman who had been bent over for 18 years and who was healed by our Lord Jesus Christ is an image of the human race. The humanity had been bent over spiritually because of the condition called sin. Sin did not allow human beings to look at heaven. And in a physical sense mankind was suffering also because of sin, suffered infirmities and death. Citing St. Gregory of Nyssa the Rector pointed out that the humanity needed a Savior from that state. And that Savior, Redeemer and Physician came in Jesus Christ. However, sin still dominates over us if we give in and become slaves to our passions. Any sinful passion, any sinful habit deviates our soul and body, so they both suffer. Take any of them, for instance, drug or alcohol addiction: they ruin human life, bend it over, damage human soul and cause the body to suffer. Only divine grace can free us from such passions. We need grace, we need Christ. In the same way as He healed the woman in today’s Gospel, He may deliver us from our spiritual infirmity. To attain that we need to stay in the Church, which is a spiritual hospital.

The choir prayerfully performed hymns in honor of the Most Holy Mother of God.

After the dismissal of the Liturgy the Rector preached a brief sermon in English addressing the main ideas of his Russian homily. He also congratulated our young parishioner and altar server, Anton Malyshev, on the occasion of his past birthday. Traditional Polychronion (“Mnogaia leta!”) was proclaimed. At the end the Rector welcomed our former parishioner, Anastasia Flora who had moved to Dominican Republic and came to visit us on this Sunday. 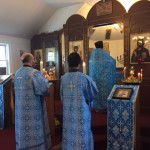 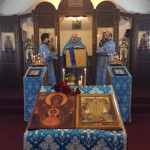 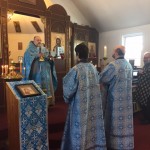 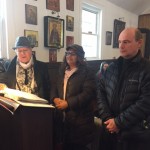 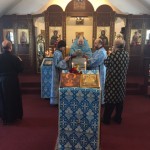 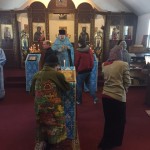 On December 3, on the 26th Sunday after Pentecost, our parish family gathered at St. George Church for a nice celebration. On that day we also observed feast of the Entrance of the Most Holy Mother of God into Temple which had been transferred on Sunday from December 4. Our Rector, Archpriest Igor Tarasov served the Divine Liturgy. Following the readings from the Gospel he preached a homily in English:

“Dear brothers and sisters in Christ! Our first Gospel lesson of today is telling us about a rich man whom God called fool (Lk. 12, 16-21). That man was certain about his future and thought that he may relax because his wealth secured him a lot of happy years to live. But, in fact, he had no future because that very night he was going to die. This is why God called this man a fool. Our second Gospel lesson, a reading always dedicated to the feasts of the Most Holy Mother of God, is telling us about a woman, named Mary who “has chosen that good part, which will not be taken away from her” (Lk. 10, 42). These two Gospel readings have a lot in common, so it is not difficult for us to think of them together.”
“The rich landowner in the first Gospel lesson did not do anything wrong or sinful. His error was in his trust in material things and in forgetting the reality of human life. Our Lord telling this parable pointed out that this man’s attitude is laying treasure for himself, instead of being rich toward God (Lk. 12, 21). It is not wrong to gain possessions or to be wealthy. But it is wrong to trust in those possessions and consider them the goal of life. It is also wrong and foolish to forget that our earthly life is limited, and we may not know the time of our passing away. But it is wise to become rich in the eyes of God which means to use his riches to serve God and other people.”
“Looking for such a way to please God and to become rich toward Him is choosing a good part which will not be taken away from us. The riches and possessions of that landowner from today’s Gospel were taken away from him when he died. But the riches gathered in the eyes of God will not be taken away. Mary in today’s second Gospel had also chosen a good part. She preferred to listen to the words of Jesus instead of being preoccupied with much serving, as her sister Martha did. Martha did not do anything wrong and sinful. In fact, she was doing a great thing trying to be hospitable to the Lord. But her serving was not something which would last forever. The meals or drinks or comfort she offered would not last. But the words of Jesus would remain in Mary’s heart. The difference between Martha’s part and Mary’s part is not the difference between right and wrong, but the difference between good and perfect. And our Lord came to this world to teach us to choose what is perfect.”
“However, most of us usually choose not a good part, but a worse part. Like that foolish rich landowner we prefer to put our trust in material things, in earthly concepts and in the life of flesh. It is understood because it is much easier to come down from the mountain than to climb it. The world gives us a lot of recipes of an easy life but none of them leads to eternity.”
“Today we celebrate feast of the Entrance of the Most Holy Mother of God into the Temple. This was a glorious and mysterious event in the early life of the Blessed Mother: She had been presented before the Lord in the Temple by Her holy parents, Joachim and Anna. They chose to give their only daughter away, to offer Her to the Lord and to leave Her to be instructed at the holy Temple. Of course, they were advanced in age and were not probably able to raise Her by themselves. But they probably could get help from their relatives and leave Mary in their home. However, they had chosen a good part. They had chosen what is perfect: to entrust their Blessed daughter to the Lord.”
“Unfortunately, nowadays many parents do not follow this perfect example. They fail to bring their children to the holy church, to make them participate in the life of the Body of Christ, to receive the Holy Sacraments. Some prefer sports practice or dancing lessons for their children on Sunday morning instead of the divine services. And the society does not acknowledge that problem at all, but instead, is encouraging this secular and godless attitude. Recently I have read that in Britain many Christian children who become orphan or taken from their parents, may be easily given to be raised in Muslim families. Thus we may see a lot of negative examples. But there are also positive examples when Christian parents raise their children in piety and bring them to the Church.”
“Dear brothers and sisters! Let us imitate Mary and the holy parents of the Blessed Mother and choose a good part which will not be taken away from us. Let us try to choose what is not just “good”, but what is perfect. And those perfect and spiritual things will last forever. Let us also love the holy temple of the Lord and attend it to live spiritual life and to gain in the temple what is everlasting and really secure. Let those spiritual gains of ours become our treasures in heaven that would await for us there, because “where your treasure is, there your heart will be also” (Mt. 6, 21).”

The choir was prayerfully performing for the first time of this year the pre-Nativity hymns, as well as the hymns of the feast of the Entrance.

After the Liturgy dismissal the Rector and the altar servers performed a rite of glorification in front of the icon of the feast. The Rector then preached a short sermon in Russian to convey main ideas of his English homily.