On Wednesday, July 28, on the day of commemoration of the Holy Equal of the Apostles Great Prince Vladimir, Rector of St. George Church, Archpriest Igor Tarasov attended celebration of the patronal feast at St. Vladimir Memorial Church in Jackson, NJ.

Coming early before the Liturgy, our Rector visited the lower temple dedicated to St. Olga. Fr. Igor offered his prayers for the repose of the known archpastors of the Russian emigration buried there and venerated the altar of the lower church. Later he joined the clergy in meeting the celebrating bishop in the main, upper temple of St. Vladimir.

The Divine Liturgy at that temple was headed by His Grace, Bishop Nicholas of Manhattan. He was co-served by the 8 priests, including Archpriest Igor Tarasov, as well as 2 deacons.

The divine services were held in the presence of the wonderworking Kursk Root Icon of the Mother of God which our Rector had an opportunity to venerate before the Liturgy.

After the Ambo prayer Bishop Nicholas preached a homily about the significance of the celebrated Saint, the Baptizer of the lands of Rus’.

Upon completion of the Liturgy the clergy performed a short prayer service to St. Vladimir in the middle of the church. Then His Grace congratulated all those present on the feast. The Protodeacon intoned the Polychronion for the hierarchs, clergy, and all who prayed at the services.

Following the services the clergy and the faithful gathered for a festal luncheon in the Parish Hall. Our Rector had a speech in which he expressed gratitude to His Grace, Bishop Nicholas for leading the clergy and faithful in celebration of St. Vladimir. Fr. Igor also pointed out how important is to follow the true Christian faith in our difficult times. We are going through a pandemic which threatens our health, however we are in danger of losing the true faith and moral values due to different attempts to eradicate religious and ethical principles from the society. It is very important to adhere to the true Orthodox faith of St. Vladimir. It is uplifting and encouraging to learn that yesterday in Kiev, in the ancient city of St. Vladimir’s Baptism of Rus’, Orthodox Christians had a great cross procession which gathered thousands of members of the canonical Church of Ukraine. These brethren of ours manifested that they are the heirs of St. Vladimir and they belong to the true Orthodox Church, not to some schismatic group. Thus we here, across the ocean, should rejoice and should cherish the same Orthodox faith and to be joyful in celebrating today’s feast of our holy Baptism.

After the Patronal feast celebration in Jackson, Fr. Igor visited a place in Freehold, NJ dedicated to be a future St. Nicholas Skete of the Russian Church Abroad. A prayer service with the blessing of the newly-constructed gazebo chapel was held there. That service was headed by Abbot Eutychius (Dovganyuk). His Grace, Bishop Nicholas was present at the service and performed the blessing of the chapel. He also brought there the Kursk Root Icon. A small group of faithful who support the future skete gathered there for the blessing and had an opportunity to venerate the icon. Following the blessing and veneration a dinner was served by the hospitable activists of the future holy place. Bishop Nicholas, Fr. Igor and Fr. Eutychius enjoyed a quiet and beautiful farmland place, as well as a nice company of dedicated faithful. 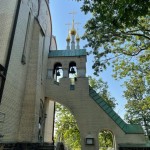 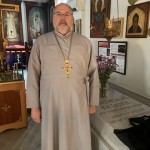 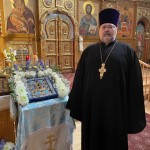 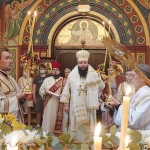 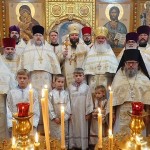 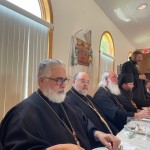 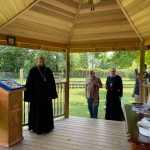 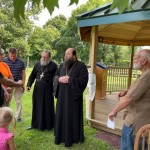 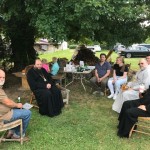 On July 25, on the 5th Sunday after Pentecost, ,Rector of St. George Church, Archpriest Igor Tarasov served the Divine Liturgy in our parish temple. After the readings from the Sacred Scripture he preached the following homily:

Before the Holy Communion the choir prayerfully performed hymns dedicated to St. Olga whose memory was celebrated recently, as well as other singings.

After the dismissal of the Liturgy the Rector congratulated our Warden and Choir Director, Olga Roussanow and our active parishioner Olga Vnukova on the occasion on their past name day handing them the Theotokian prosphora. Traditional Polychronion (“Mnogaia leta!”) was proclaimed.

Following the Liturgy the Rector and parishioners enjoyed delicious luncheon. Our guest Vakhtang Kakishvili volunteered to grill some meat on the barbecue. The greetings and toasts were raised in honor of our two Olgas who celebrated their name day. 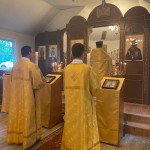 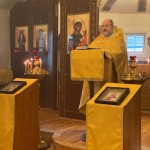 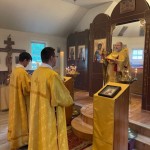 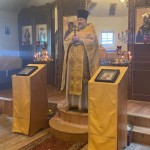 On July 18, on the 4th Sunday after Pentecost we had a nice celebration at St. George Church. Our Rector, Archpriest Igor Tarasov served the Divine Liturgy after his return from Ukraine. After the Gospel lesson he preached the following homily:

“Dear brothers and sisters in Christ! Today’s Gospel reading tells us about a healing of a paralyzed servant of the Roman centurion. Our Lord Jesus Christ performed such a miracle even without seeing or approaching the sick person. It was done through faith and intercession of the ill servant’s master. Let us reflect upon this event described in the Gospel of Matthew”.
“A centurion was a Roman army officer who commanded one hundred men. This person mentioned in the Gospel was a Gentile. But he had a faith that Jesus is the One who can help his servant to be cured from the disease. Although Christ usually stressed that He came to save His own people, the Jews, the whole ministry and the whole message of His teaching was encompassing the whole human race, regardless of the people’s origin. Jesus is really the Savior of all. For Him ethnic or social distinctions are void. In the eyes of the Jews, especially the Pharisees who were always ready to criticize Jesus, coming to the house of a Gentile was inappropriate. If Jesus entered the centurion’s home, it would make Him unclean. However, the Lord could act without entering the Gentile’s house. Doing so, He showed that salvation will come upon all the people of faith”.
“In the words of the centurion we hear the recognition of Jesus’ authority. He calls Jesus the Lord. It was significant for a man who himself had authority. But although the centurion had the power over men, he understood that only Jesus had the power over disease. He also understood his own limitations and unworthiness. Therefore, he said to Christ: “Lord, I am not worthy that You should come under my roof “(Mt. 8, 8). But his sense of humility was perfected by his firm faith in the healing power of the Lord. Thus he continued: “But only speak a word, and my servant will be healed”(Mt. 8,  8).  The word of the Savior is enough for a man to be freed from his disease”.
“This event teaches us about the importance of faith. Our Lord Jesus Christ praised the faith of the centurion. He speaks highly about that Gentile person, lifting him up as an example. The Lord goes further and declares nullity of the Jewish supremacy, saying that many from other nations will share the heavenly blessings with the Jewish patriarchs. He prophesizes: “And I say to you that many will come from east and west, and sit down with Abraham, Isaac and Jacob in the kingdom of heaven. But the sons of the kingdom will be cast out into outer darkness” (Mt. 8, 11-12). We know that the sons of the kingdom are Jews, who had a sense of racial or national superiority as the chosen people of God. Coming of Christ demonstrated that not the Jews but all the people who believe in the Savior will become the chosen nation, the New Israel”.
“The last time I served here, was on the feast of the Pentecost. But then we celebrated two consecutive Sundays dedicated to the Saints. We had Sunday of All Saints and then we had Sunday of the Russian Saints. I was away and celebrated them there. You were celebrating them here. Those two Sundays made us recall that as a result of the descending of the Holy Spirit different nations acquired the right to become the true worshipers of God. Many nations accepted the preaching of the Gospel and produced lots of holy men and women, people we call the Saints. Today we celebrate feast of one of our own Saints, the Uncovering of the relics of Venerable Father Sergius of Radonezh. That Saint certainly did not belong to the chosen people of the Old Testament. He was our Russian, Slavic person. But since he was a Christian, since he cherished his Orthodox faith in Jesus Christ, he was one of the chosen ones, belonging to the New Testament chosen nation. His holy life in Christ and in a special devotion to the Most Holy Trinity made him worthy to sit with Abraham, Isaac and Jacob in the Heavenly Kingdom”.
“Therefore, dear brothers and sisters, let us keep and cherish our faith in the Lord Jesus Christ, our only Savior. Let us recognize His power and authority over the whole world and over any little thing in our lives. Let us believe that He can help us if we have faith. Let us also understand our limitations and unworthiness and humbly ask Him to help us. And let us be worthy of the name of Christian that means to be among the chosen people of God, His holy nation which is prepared to sit down with Abraham, Isaac and Jacob, also with the Holy Apostles, Martyrs and other Saints in the Kingdom of heaven”.

After the dismissal of the Liturgy the Rector made some announcements. He expressed his gratitude to those parishioners who assisted in removing the tree fallen after the storm. Especially he commended Emilian Suric who found a tree removing company and donated part of the payment, as well as Alexander Bezkrovnyj who helped working.

Following the Liturgy the Rector served a memorial Litia for the repose of Valentina Malyshev and Larisa Vnukova requested by their families.

After the services the Rector and parishioners interacted at the coffee hour. 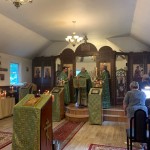 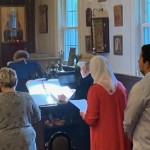 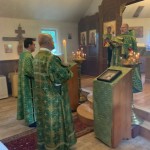 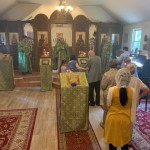 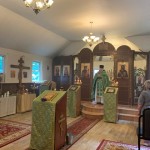 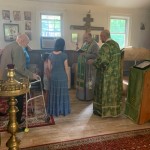 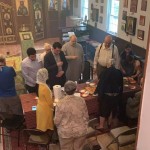 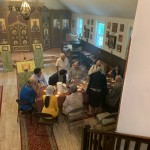 The Rector of St. George Church, Archpriest Igor Tarasov from June 22 until July 16 was in Ukraine.
First, he visited the ancient city of Kiev where he had a chance to pray at the Kiev Cave Lavra monastery, to venerate the relics of the Saints in the Caves and to attend the temples there.
Then Fr. Igor headed to the city of Kamianets-Podilsky where he stayed for the rest of his trip to Ukraine. On Sundays and some feasts he served in the local cathedral of S. Alexander Nevsky. The services like All-Night Vigils and Divine Liturgies were usually headed by the local ruling bishop, His Eminence, Metropolitan Theodore.
Following the services our Rector had an opportunity to interact with the clergy and the faithful. 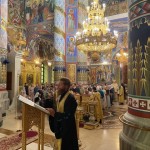 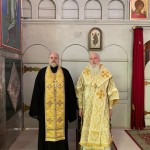 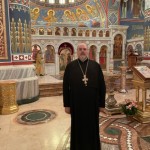