On May 27th, on Sunday of the Holy Fathers of the 1st Ecumenical Council, we had a Divine Liturgy celebrated in our church. The Liturgy was served by our Rector, priest Igor Tarasov.
After the Gospel lesson Fr. Igor continued his lectures on the Liturgy. This time he explained the meaning of the petitions of the Litany before Communion. That litany (or ektenia) is also called the Litany of Asking (or Beseeching). In that litany we ask the Lord for a number of things which represent our different needs. To the priest’s (or deacon’s) appeal “Let us ask of the Lord” at the end of each petition, the choir (or the congregation) responds: “Grant this, o Lord!” Fr. Igor pointed out that the needs described in those petitions are, first of all, spiritual needs. In the beginning of the Liturgy and even later, in the course of the service, the priest may pray for the earthly things like peace, unity, for the people traveling, for the sick and so on. Now, at this point when we are preparing to receive holy Communion, we are asking to grant us spiritual blessings. We need them to be worthy to receive the Eucharist. Fr. Igor further described the petitions and their meaning in detail.
After the Liturgy parishioners enjoyed delicious trapeza on the church property.

On May 24th of this year we celebrated great holy day of the Ascension of our Lord. Our Rector, priest Igor Tarasov served solemn Divine Liturgy at St. George’s Church.
After the reading of the Gospel Fr. Igor preached a homily. He reminded that this year feast of the Ascension falls on the day of St. Cyril and Methodius, the Enlighteners of the Slavs. It is the name day of His Holiness, Patriarch Kirill. The mission of the two holy and Equal to the Apostles brothers was very important for the Slavic people who received the translation of the Scripture and main liturgical books in their language.
Further, Fr. Igor preached about the Ascension of the Lord. He noted that Ascension could be viewed as a sad event because the Lord is leaving His Disciples. But the feast is, in fact, very joyful. There are at least, three reasons for that. First, the Lord does not leave the Apostles as orphans. He promises to send the Holy Spirit. That promise was fulfilled in 9 days. Secondly, we should be glad for the Lord who accomplished His mission of Redemption and now is returning to His Father, to be in heaven, at the right hand of God. Jesus goes where He was from the beginning. And thirdly, He goes to heaven to prepare there a place for us. “Thus, having a place reserved for us in heaven, let us try to collect for ourselves treasures in heaven, not on earth”, – said Fr. Igor.
At the end of the Liturgy the Rector proclaimed the Polychronion (singing of “Many years”) to His Holiness, Kirill, the Patriarch of Moscow and All Rus’.

On May 20th, on Sunday of the Blind Man, Rector of St. George Church, priest Igor Tarasov celebrated the Divine Liturgy.
After the Gospel lesson Fr. Igor lectured on the Liturgy. He discussed the conclusion of the Eucharistic canon. Following the invocation of the Holy Spirit upon the Gifts and after the Gifts are being sanctified, the priest continues the Eucharistic canon by commemoration of the Saints, living members of the Church and those who fell asleep. Since the sacrifice of the Liturgy is “on behalf of all and for all”, the priests commemorates different kinds of members of the Body of Christ: living, departed and the Saints in heaven. That prayer is said in a low voice but it is interrupted by a loud commemoration of the Most Holy Mother of God. The congregation responds to that exclamation with a hymn in honor of the Theotokos. In the usual time it is a very known hymn “It is truly meet…”. On the holy days or some other occasions we use some other, substitute hymns. During that singing of the hymn the priest continues to commemorate the Saints: St. John the Baptist, the holy Apostles, the Saints whose memory is celebrated on that day. Then the living and the dead are being also commemorated. At the end the priest exclaims: “Among the first, remember o Lord, our great lord and father…, the Patriarch of Moscow…” Thus, the Church hierarchy is being remembered. The congregation responds: “And each and everyone”. The priest finishes the commemoration with the blessing of the people, asking that the mercy of God be always with them. The people respond: “And with your spirit”. In this manner the faithful ask God to bless the priest with the grace necessary for the functioning of his office, ministry and for his dignity.
At the end of the Liturgy Fr. Igor reminded that on that very day the Church commemorates the Apparition of the Sign of the Cross in Jerusalem which took place in 351 AD. At that time in the 4th century the Church was suffering from the dangerous heresy of Arianism. The first Christian emperor, St. Constantine, died and his successor, emperor Constantius, became a supporter of the heresy. At that point the Sign of the Cross appeared in the sky over Jerusalem. Many people saw it. It was shining brightly and shimmering with all the rainbow colors. This event was recorded by the historians. Many Jews and Gentiles converted to Christian faith due to that miraculous sign. Fr. Igor further preached that such an event teaches us that people who have the true and firm faith may be able to see with the spiritual eyes. “Today’s Sunday of the Blind Man presents us a story about a person who was born blind but received his sight from Jesus. That man acquired both physical and spiritual sight, for he became able to see both the world around him and the Lord of that universe. He worshipped Christ. But the Pharisees being able to see physically, were blind spiritually, for they did not recognize Jesus as their Messiah. In our times, there are a lot of people who are unable to see Jesus as the Lord and Savior. And even if they would witness a sign like an apparition of the Cross in the sky, they would probably refuse to believe. You need not just physical vision to believe. If you have a spiritual vision, then you are able to see the signs of God’s presence in many things. Take the nature. If you explore it having faith you will see the Creator and His wisdom. Science along with faith is a great thing. But science without faith is a perfect evil. Therefore, let us cherish and keep the true faith and attempt to acquire and preserve the spiritual sight, not to be blind spiritually,” – said our Rector.
After the service, due to a gorgeous weather, Fr. Igor and parishioners enjoyed our common trapeza outside of the church, under the shadow of the old trees.

On May 13th, on Sunday of the Samaritan Woman, priest Igor Tarasov served the Divine Liturgy at St. George’s Church. On this day we also celebrated feast of the Holy Apostle James.
During his sermon following the reading from the Gospel Fr. Igor told about St. James, who was one of the 12 Apostles, the son of Zebedee and the brother of St. John the Theologian. He then continued his regular lectures on the Liturgy. This time he discussed the Epiclesis which means the invocation of the Holy Spirit to come and sanctify the Gifts on the altar, to make them the true Body and Blood of Christ. Fr. Igor pointed out that Orthodox Christians hold that the Epiclesis completes the mysterious change of the Gifts. Therefore, bread and wine offered at the Liturgy turn into the Body and Blood of Christ when the invocation of the Holy Spirit is performed. The priest blesses the bread and the chalice and then makes a bow or prostration before them as a sign of reverence before the Lord present there.
At the end of the Liturgy the Rector congratulated all the women and, especially, the mothers and grandmothers in the parish on the occasion of the Mother’s Day. The choir sang “Mnogaia leta” (“Many years”) to the mothers. 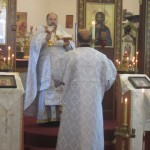 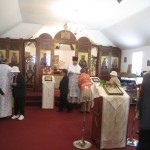 On May 6th our parish celebrated Patronal fest of the Holy Great Martyr George. This year it fell on the 4th Sunday of Pascha, of the Paralytic. Our Rector, priest Igor Tarasov celebrated solemn Divine Liturgy. He was joined by other clergy who came to celebrate with us despite the Sunday duties at their places of service. The Liturgy was concelebrated by Hieromonk Eutychius (Dovganyuk), Hieromonk Zosimas (Krampis) (both from the ROCOR) and Deacon John Peters from St. Nicholas Cathedral.
Following the reading from the Gospel Fr. Zosimas preached a homily.
Our temple was almost filled with the guests from other parishes, among whom were the youth representatives from St. Nicholas Cathedral headed by Igor Kochan, our friend and benefactor Captain Stelios Tatsis and some parishioners of the other Russian churches of the area.
At the end of the Liturgy the Rector preached a brief sermon about our holy Patron, St. George. He stressed that this Saint has a great favor with the Lord and is honored in all the Orthodox nations, as well as among other Christians. A number of countries, regions or cities have him as their heavenly Patron. It is known that even some non-Christian people honor St. George. For instance, many Muslims come to a monastery in Turkey where they venerate the miraculous icon of the Saint, despite their religion which prohibits veneration of the icons. Fr. Igor congratulated all the parishioners and guests on the occasion of this joyful feast of the Victorious and Wonderworking Martyr George. He also expressed his gratitude to the clergy and lay people who came to share our joy on this special day. At the conclusion the Rector proclaimed a polychronion (singing of the “Mnogaia leta!, “Many years!”) to the hierarchy, present parishioners and guests and all the Orthodox Christians.
Celebration continued on the church property where our ladies and the youth organized a picnic. At this point we were happy to welcome the Rector of the Annunciation Church in Flushing, Archpriest Alexi Ohotin who came after the Sunday service in his own parish. Fr. Alexi joined us at the table and was asked to give a blessing of the trapeza. Everybody enjoyed delicious food, nice company, interesting conversations, as well as singing of the Russian and Ukrainian songs.