On June 17, on the 3rd Sunday after Pentecost, Rector of St. George Church, Archpriest Igor Tarasov served the Divine Liturgy in our parish temple. Following the Gospel lesson he preached a homily in Russian.

In his homily the Rector interpreted the New Testament distinguished teaching of Christ regarding not worrying about material things from the Lord’s Sermon on the Mount. The Lord said, “Therefore I say to you, do not worry about your life, what you will eat or what you will drink; nor about your body, what you will put on. Is not life more than food and the body more than clothing? Look at the birds of the air, for they neither sow nor reap nor gather into barns; yet your heavenly Father feeds them. Are you not of more value than they? Which of you by worrying can add one cubit to his stature? So why do you worry about clothing? Consider the lilies of the field, how they grow: they neither toil nor spin; and yet I say to you that even Solomon in all his glory was not arrayed like one of these” (Mt. 6, 25-29).
Literally and superficially those words of Christ sound strange. However, if we think of it deeply, we may find a great sense in these words. If we believe in God, if we admit that He is the Creator and the Ruler of the universe, we understand that nothing happens without His blessing or His permission. All our actions won’t be successful if God would not allow them to be. Of course, we need to work and earn a living: Jesus did not say not to; He only said not to worry, not to be anxious about those things.
This teaching of Christ calls us to set our priorities correctly. What is spiritual and eternal is much more important than material and temporary things. Our religion affirms that spirit is primary and the matter is secondary. In today’s Gospel lesson the Lord teaches that saying, “The lamp of the body is the eye. If therefore your eye is good, your whole body will be full of light” (Mt. 6, 22). “The eye” here means our spirit, our mind which leads and governs the body. Therefore, we need to seek the purity of the soul which would lead both the body and the spirit to live a pious life leading to eternity. And the material things will be added to us if we do our work trusting in God.

Following the dismissal of the Liturgy the Rector preached a brief sermon in English conveying the main thoughts of his Russian homily. He also congratulated our men on the occasion of Father’s Day. The traditional Polychronion (“Mnogaia leta!”) was proclaimed.

After the liturgical celebration the Rector and parishioners enjoyed delicious meals at the coffee hour.

On June 10, on the 2nd Sunday after Pentecost, as well as Sunday of All the Saints of the Land of Rus’, our Parish family gathered for the liturgical celebration at St. George Church. Our Rector, Archpriest Igor Tarasov served the Divine Liturgy. After the reading from the Holy Gospel he preached the following homily in English:

“Today’s 2nd Sunday after Pentecost is dedicated to All the Saints which were glorified in the Lands of Rus’. To be precise, this is the holy day to honor the Saints of our local Church, the Russian Orthodox Church.”
“Holding such celebration today, we should consider what do we have in common and what makes our spiritual past unique and special? Every nation or every culture contributes something to the treasury of human existence. It is agreed that the Jews gave the humanity the true faith in one God; the Greeks gave the wisdom of philosophy; and the Romans gave the order of the law. If we think of Italy, we call it beautiful. If we think of America, we appreciate its good business. If we think of Germany, we know it is famous for order and neatness. And when we think of Rus’, we recall that it used to be called “Holy”. Our spiritual heritage is the Holy Rus’. This is our uniqueness, to be part of the culture of holiness. Of course, Rus’ and Russia had never been truly holy. There were a lot of terrible crimes and transgressions committed by its rulers and by regular people in the course of history. However, to be holy was the ideal to which our ancestors were striving despite their weaknesses and errors. If we think well, we may see that not all Italy is beautiful. We may also see that not every American is a good businessman: in fact, lots of Americans are lazy and living on a welfare programs. Even in Germany, not everything is so neat and in order. But there is a tendency, an ideal to which those nations are striving. Same is with our spiritual culture.”
“Unfortunately, many of the heirs of the Holy Rus’ are now not living up to their spiritual ideals. Today’s stereotypes suggest that if we think of a Russian, it is a drunkard, a lazy man or even some villain. Take modern jokes about different nationalities: they all say that. But there was a time in the past when the jokes were different. And not just jokes. Some European thinker in the 19th century wrote: “The Englishman wants to see the world as a factory, the Frenchman as a salon, the German as a barracks, but the Russian as a Church”. Thus, it was so different some two hundred years ago. The ideals of the Holy Rus’ were so alive but spiritual wellness of the Russian people so deteriorated that today we may only feel sorry about our glorious past.”
“But it would be incorrect to seek the solutions in the past only. As I said, Russia had never been really holy. And what happened to it a century ago – all those terrible events such as revolution, civil war and the years of a godless regime – all this was a result of that insufficient holiness. We need to look at the future but to learn from the past. And if we wish to restore our ideals of the Holy Rus’, we need to embrace the attitude of true Christianity, not an attitude of this world. We need to seek God and His Kingdom. Our call not to be so beautiful, not to be so successful in business, not so neat and orderly, but to show the world holiness. This is a very difficult path but we should go through it.”
“If we feel weak and unsure, we need to recall our Saints whom we honor today. They were our relatives either by blood or by common culture. They were able to please God by their lives, so can we. Every century and every period of history our Church bore many holy men and women who dedicated their lives to God and to Christian ideals. Even in modern times when so many heirs of the Holy Rus’ became unholy and turned against God and His Church, we know about a great number of our Saints. Fearsome times of the godless power revealed so many New Martyrs and Confessors that their number impresses everyone. Their testimony shows that despite the dominant tendency of atheism and despite the temporary victory of godless powers, many faithful souls chose to belong to God and to suffer for Christ.”
“Therefore, dear brothers and sisters, let us pray to the Saints of Rus’, so they may intercede for us before the merciful Lord, that they may ask Him to restore our sanctity, that the light of holiness in the lands of Rus’ would not fade away and that our future would see the Russian Church continuing to shine with its holy men and women!”

The choir beautifully performed the hymns dedicated to the Russian Saints during preparation for Holy Communion.

Following the dismissal of the Liturgy the Rector preached a short sermon in Russian conveying the ideas of his English homily. 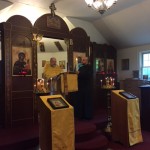 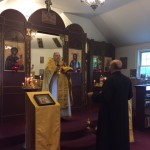 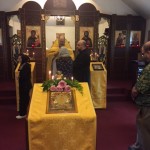 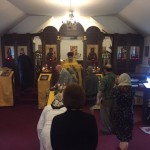 On June 3, on the Sunday of All Saints, as well as feast of the Icon of Our Lady of Vladimir, Rector of St. George Church, Archpriest Igor Tarasov served the Divine Liturgy at our parish temple. Following the Gospel lesson he preached a homily in Russian.

The Rector stressed the idea that to be a Saint is a vocation for every Christian person. We are called to be Saints, to be Holy by receiving Holy Mysteries of Baptism and Chrismation. To become a Saint is a possible task, however, it is a supernatural task because our holiness depends on God’s help and His grace. It requires our efforts, our talents and spiritual strength, but it also depends on God’s help. If we will desire to please the Lord, He will assist us with His grace.
Holiness is one of the qualities of God. Only God is truly and always Holy. But He created man according to His image and likeness and He desired us to be holy. The first people, Adam and Eve, were holy in paradise; only the fall deprived them of that quality. But our Lord Jesus Christ came into this world to restore fallen humanity, to return us to holiness and to give us a capability to acquire it.
The way to attain holiness is simple: to live spiritual life in Christ, to keep the Commandments, to receive the Sacraments. This is understood. But there is one more thing mentioned in today’s Gospel lesson: it is necessary to seek God and to inquire what is eternal, not temporary. The Lord says: “He who loves father or mother more than Me is not worthy of Me. And he who loves son or daughter more than Me is not worthy of Me” (Mt. 10, 37). Many, especially not religious people, would say that these are cruel and harsh words. But if you think of it well, we realize that God is the most important. These words of Christ do not teach us not to love our parents, children or spouses. No! But they teach us that God is above everything and everyone. And our human love has its source in God who is the Absolute Love. If there was no God, there would be no love and even life at all.
Therefore, an important idea of today’s Gospel lesson is to set our priorities correctly. We ought to love eternal God more than everything else which is His creation, including ourselves and our neighbors. We need to sacrifice many things in our lives for Him like Holy Apostles did. They left everything and followed Christ. But note that the Lord does not demand everyone to sacrifice everything but to give up certain things according to our calling. This is why there are different kinds of Saints, with different endeavors and various ways of life. But all their lives were leading them to God and to His Heavenly Kingdom.

The choir prayerfully performed hymns in honor of All Saints and of the holy Icon of Our Lady of Vladimir before Holy Communion.

Following the dismissal of the Liturgy the Rector preached a short sermon in English conveying the ideas of his Russian homily.

After the sermon the Rector congratulated the Malyshew family on the occasion of the name day of their daughter Elena. Fr. Igor wished our youngest parishioner God’s blessings and intercession of her heavenly patron, Holy Equal to the Apostles Empress Helen. Traditional Polychronion (“Mnogaia leta!”) was sung.

Following the service the Rector and parishioners enjoyed delicious meals at the coffee hour. A toast in honor of the youngest parishioner celebrating her name day was raised. 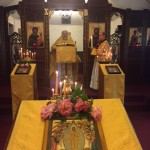 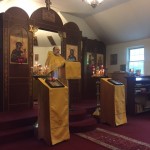 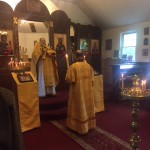 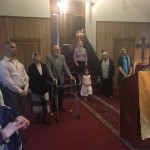 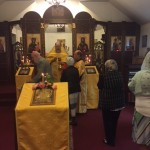 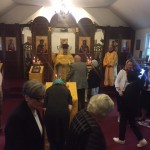