Please, note that beginning with Sunday, June 5 we switch to our Summer Schedule. Sunday services will start at 9:00 AM.
For more information please check our monthly Service Schedule.

On May 29, on the Sunday of the Samaritan Woman, St. George Parish family had a nice liturgical celebration. The Divine Liturgy was served by Priest Aleksiy Paranyuk who substituted our Rector.

After the Liturgy the priest along with our parishioners enjoyed delicious meals and a nice company during the coffee hour.

On May 22, on the Sunday of the Paralytic, as well as on the feast of the Transfer of the Relics of St. Nicholas the Wonderworker, we had a nice celebration in our temple. Our Rector, Archpriest Igor Tarasov served the Divine Liturgy. Following the Gospel reading he preached the following homily in English:

“Dear brothers and sisters! Today we celebrate Sunday of the Paralytic. We commemorate the event described in today’s Gospel lesson: healing of the paralytic at the pool located at the Sheep Gate (Jn. 5, 1-15). The pool was called Bethesda which means the “House of mercy”, “Mercy house”.
”The state of paralysis reminds us of the state in which the whole mankind was living due to sin. The human kind was spiritually paralyzed. It needed a Savior, a great Healer. But who could become such a Healer, such a Savior? In many legends and myths people thought that it should be a great man, a hero. Even the Jews who believed in one God thought that the Messiah should be a human person. However, this was not possible for any man because human kind was sinful. It could be done only by God, but God willed to do it becoming also a Man.”
“The whole attitude of waiting for a man, for a hero to save is reflected in today’s Gospel. The paralytic says, “Sir, I have no man to put me into the pool when the water is stirred up…” (Jn. 5, 7). He put his trust on men and he was unsuccessful for many years. He should have learned from the Scripture saying, “Do not put your trust in princes, in the sons of men, in whom there is no salvation” (Ps. 145, 3). These words of the Psalm we sing every Sunday at the Divine Liturgy. People who attend the church should know them by heart. We should not put our trust in men but in God.”
“Jesus was the Son of God, thus He could help the paralytic. So, He can help all the people in need, in sufferings, in pain. He is able to do this because He conquered death, was risen from the dead.”
“On the other hand, the people who follow Christ, who are united with Him, can also become the partakers of His power. They continue His miracle working and the mission of salvation. In today’s Epistle we heard that Holy Apostle Peter was able to heal the paralytic also. And he was able to raise a recently dead young woman. St. Peter healed by the name of Jesus Christ (Acts 9, 34). And it is not accidental that today’s Epistle mentions that the followers of Christ were already called “Saints” (Acts 9, 32). People dedicated and belonging to God are saints. Such people are able to conduct the divine grace and the will of God. If we put our trust on God, He can act through such men.”
“One of such holy men was St. Nicholas the Wonderworker whose feast we celebrate today. On this day we commemorate transfer of his relics to the city of Bari. St. Nicholas was a man who became known for a number of great miracles. He performed them during his earthly life and after he passed away, when the faithful offered their prayers to him. But he did all these miraculous works not by himself. He was a conductor of the divine power, of the God’s grace. Jesus Christ is the Source of such power, and the holy men and woman are the partakers and conductors of it.”
“Dear brothers and sisters! Let us put our trust in God. Let us be faithful to our calling as Christians. Let us strive for being the partakers of our Lord’s grace and the conductors of His power. Let us also acquire this power in the Church where we can meet the people dedicated to God, the Saints of our days. The Church is our House of mercy, our healing place, a place of God’s graces. Let us belong here and become a part of our Lord’s Resurrection.”

Following the dismissal of the Liturgy the Rector preached a short sermon in Russian to explain the ideas of his English homily. 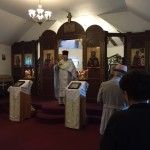 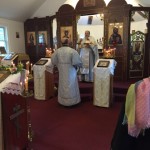 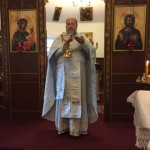 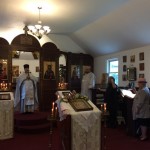 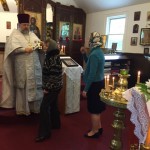 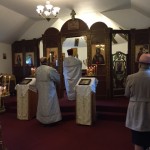 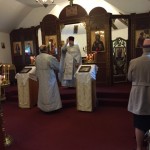 Recently a new sign of our church had been installed beside the building of our parish temple.
It was prepared in an artistic manner by our parishioners Vitaly and Andrew Malyshew. They put the new sign just before Pascha. Later they finished decorating the sign by making a beautiful mini-dome with a cross on the top of it.
We are very grateful to Andrew and Vitaly Malyshew for their dedicated labor and great assistance to our Parish! 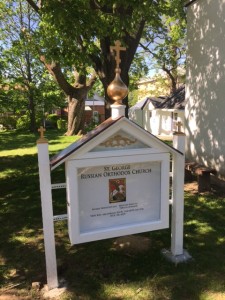 On May 8, on the Sunday of Antipascha, or Sunday of St. Thomas, our Parish family gathered for a beautiful celebration. Our Rector, Archpriest Igor Tarasov served the Divine Liturgy in our temple.

Following the Gospel reading he preached a homily in Russian. In that homily the Rector spoke about the great value of faith when someone believes without any proof. However, for many people some proof may be helpful and may strengthen their faith. This was the case of the Holy Apostle Thomas who desired to believe in the Resurrection of Christ but needed a proof. And the Lord condescended to him and showed Thomas His risen body. Thus many people may doubt but a doubt should be positive, with a wish to believe. Then the Lord may help us and give us a chance to make our faith stronger.

After the Liturgy dismissal the Rector preached a short sermon in English explaining the ideas of his Russian homily.

Following the service the Rector distributed Paschal blessed bread, called the Artos, to the parishioners. 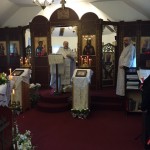 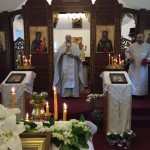 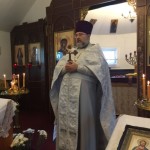 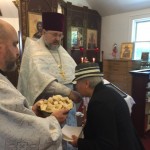 On May 6 the Church commemorates Holy Great Victorious Martyr George. This is a Patronal feast of our Parish.

St. George parish family had a solemn and beautiful celebration. It was headed by our Archpastor, Most Rev. John, Bishop of Naro-Fominsk. His Grace arrived at 10:30 AM and was greeted by our Parish Warden Olga Roussanow at the entrance to the temple. Bishop John entered the church where he was met by the Rector, Archpriest Igor Tarasov.

During the Paschal Hours the Bishop was vesting in the altar. Following the Hours His Grace began the Divine Liturgy. The Liturgy was concelebrated by our Rector, as well as by Hegumen Nicodemus (Balyasnikov), Secretary to the Bishop, Hieromonk Eutychius (Dovgan), cleric of the Synodal Cathedral (ROCOR), Priest Ion Arama, Rector of the Annunciation Church in Flushing, NY, and deacon Mark Rashkov. Service was also attended by our former Rector, Hieromonk Zosimas (Krampis) who prayed in the temple and sang along with the choir.

Following the Liturgy dismissal the Bishop along with the serving clergy came out of the sanctuary to the middle of the temple and performed the rite of glorification singing the troparia, the kontakion and the magnification in honor of St. George.

At the end of the Liturgy His Grace preached a sermon. He also congratulated the Rector and parishioners on the joyful Patronal feast of St. George. As a response to the Bishop’s speech Archpriest Igor Tarasov greeted His Grace in our temple. Traditional Polychronion (“Mnogaia leta!”) was sung.

After the liturgical service the celebration of our Patronal feast continued at the trapeza table where His Grace, the clergy, our parishioners and guests together enjoyed delicious food and a nice company.

On May 1 of this year 2016 all Orthodox Christians celebrated the greatest holy day, the Resurrection of our Lord Jesus Christ, Holy Pascha.

Celebration at St. George Church began at 11:30 PM on Saturday, April 30. Our Rector, Archpriest Igor Tarasov performed Midnight service at the Lord’s Tomb and transferred the holy Shroud to the altar.

Right after midnight joyful Paschal celebration began. The Rector assisted by the altar servers led faithful in the procession around the temple. At the end of the procession everyone stood in front of the closed church doors where Fr. Igor began Resurrection Matins and proclaimed the Easter greeting, “Christ is risen” in Slavonic, English, Greek and Georgian languages. Faithful responded and sung Paschal troparion. Then the priest opened the doors of the temple and faithful entered into the church.

After the Matins the Rector served the Divine Liturgy. The Gospel lesson on Pascha is traditionally read in several languages. The faithful had an opportunity to listen the verses of the reading in Greek, Latin, Hebrew, Church Slavonic, English, Russian, Ukrainian, Georgian, Serbian, Romanian, Belorussian, Polish and Spanish. Following the Gospel reading Fr. Igor proclaimed Catechetical Sermon of St. John Chrysostom on Pascha.

After the Liturgy dismissal the Rector greeted the parishioners on the occasion of the greatest Christian holy day, wished them to be blessed by the Risen Christ.

Rector and parishioners continued their celebration of Pascha at the tables where they had an opportunity to enjoy delicious meals after the long time of Lenten restrictions.