On Sunday, June 19, 2016 the Orthodox Church celebrated Pentecost, also known as feast of the Most Holy Trinity. St. George Parish had a beautiful celebration on that day. Priest Aleksiy Paranyuk who substituted for our Rector, served the Divine Liturgy.

Pentecostal Vespers with kneeling prayers was served right after the Divine Liturgy. 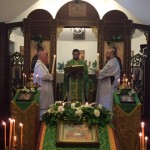 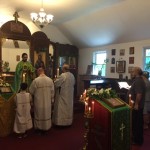 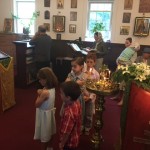 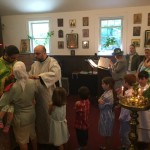 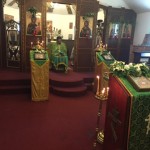 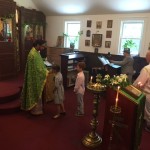 On June 9 of this year the Orthodox Church celebrated great feast of the Ascension of the Lord. St. George parish had a nice celebration on this day. Our Rector, Archpriest Igor Tarasov served the Divine Liturgy.

Following the Scripture readings the Rector preached a homily. He pointed out that the Ascension of Christ teaches us humility. Although the very word ‘ascension’ means some uplifting upon the earth and upon anything inferior, our Lord ascended into heaven only after He lived on earth, endured human life, voluntarily endured His passions and death on the cross. Even after His Resurrection He did not leave the earth and His disciples but stayed for forty days, appearing to the Apostles. When He accomplished His ministry as the Savior of the world, He could allow Himself to leave. Some people act differently. If they wish to leave their native town to pursue a new life in a big city, very often they like to forget about their native place, and may even be ashamed of it. In this way they feel ‘ascended’ and lifted above their past. It is a pride which may lead them to a failure. Our Lord, on the contrary, reached His Ascension through humility. And by ascending into heaven He took our human nature to the heavenly abode of His Father. Therefore, we should also strive for our own ascension through humility and service to others, so our human nature may join our Lord Jesus.

After the Liturgy dismissal the Rector and altar servers performed the rite of Glorification in front of the festal icon singing the troparion, kontakion and magnification of the feast.

On June 5, on the Sunday of the Blind Man, Rector of St. George Church, Archpriest Igor Tarasov served the Divine Liturgy in our parish temple. Following the Gospel lesson he preached a homily in Russian. An English translation of that homily is as follows:

“Today we celebrate the last Sunday of the Paschal period which is called “Sunday of the Blind Man”. To be precise, it should be called “Sunday of the Man Born Blind”, as it is called among many other Orthodox nations. For today’s Gospel lesson tells us about granting sight to a person who was born without being able to see, born even without eyes. This was the greatness of that miracle that the Savior not just granted the sight to a blind man, but created the organs for this man’s vision. However, the bodily sight granted by Christ to this man, should point us to the importance of the spiritual sight.”
“It is a great happiness to possess bodily sight. Most of the people have this gift but do not fully appreciate it. But if you imagine for a moment that we lost our vision and we won’t see anything we saw before, that we won’t see the blue sky and the green grass, won’t see the light of the sun and the faces of the people who are dear to us, then we may become grateful to have the sight. However, many of us are not able to imagine how bad is to live without spiritual sight, and it is hard for us to define what is spiritual sight. The spiritual sight is to see the things the way they are and to understand that they are created by God. The spiritual sight is an ability to believe in true God and to follow Him. And in today’s reading from the Holy Gospel we heard how the Lord granting the bodily vision to a man, gave him an ability to acquire spiritual sight.”
“The man born blind after obeying Christ and washing in the Pool of Siloam became not only having a vision, but he also understood that Jesus, who did it to him, is the Son of God and the Savior. “He said, “Lord, I believe!” And he worshiped Him” (Jn. 9, 38). That tells us that he acquired spiritual vision.”
“Before the coming of the Savior almost all the people in a spiritual sense were similar to a man born blind. Everybody was born with a spiritual defect, with an original sin of Adam, and being unable to see the truth. Only some righteous men and women could achieve spiritual vision but it was not truly clear. The Jewish people, chosen by God, who formally knew and worshiped the one and true God, was very often spiritually blind. And today’s Gospel lesson gives us an opportunity to see that. The Pharisees and the scribes, instead of recognizing their Messiah in Jesus, do everything to fight Him. After seeing the miracle of granting a vision to a man born blind, instead of believing in Christ and worshiping Him, as that blind man did, they conduct the whole investigation. They interrogate the healed man, they interrogate his parents, and remain disappointed in the results of their investigation. They hypocritically ask the man to praise God because, as they say, Jesus is “a sinner” (Jn. 9, 24). But now this uneducated man teaches those learned scribes a good lesson: he says he does not know about the sins of Jesus but he does know that He opened his eyes and that God does not listen to the sinners (Jn. 9, 31).”
“Our Lord Jesus Christ enabled the whole mankind to acquire spiritual sight through the holy faith and through the following in His steps. But today also many people in this world continue to stay in spiritual darkness. First of all, this darkness shows itself when people refuse to believe in Christ. The Jews continue to stay in such darkness. They praise themselves as being the God’s chosen people, but in fact they had lost the light of the divine truth long ago. It is not surprising that they began to believe in different superstitions and occult teachings known under the name of cabbalism. What the Jews consider a great wisdom of the Cabbala is, in fact, a mixture of pagan views about the world and a search of some secret knowledge, all covered by the terms taken from the Old Testament religion. This is why the Lord criticizing the Pharisees and the scribes, whose followers are the modern Jews, called them the “blind leaders of the blind” (Mt. 15, 14). Not better in their spiritual blindness, and sometimes even worse, are the Muslims, the Buddhists and the followers of the pagan cults.”
“But the spiritual darkness is not only a refusal to believe in Christ. Such darkness also engulfs us, faithful Christians, when we commit sins. By the mercy of God sometimes we receive spiritual sight, but very often, being blinded by sin, we lose the light of the faith in Christ and we wander in our life in the darkness, thinking that we are able to see. Our intellect influenced by our flesh and concentrated on the cares of everyday life, loving only material goods, always leads us to oppose the teaching of the Lord. The heart of a spiritually blind person becomes hard and cruel. Such a person hears by his ears and sees by his eyes but does not listen to them. That person begins to oppose God, and then God leaves such a person.”
“Venerable Seraphim of Sarov said, “If man knew what it is to see God, he would agree to come to Him through any darkness”. For everyone of us the darkness is the multitude of our sins. Therefore, dear brothers and sisters, let us beware to sin and let us repent if we do sin. And may everyone, according to his or her prayers, the Lord grant spiritual sight, that is an ability to distinguish the sins and the good things, and to acquire a vision of the holy and such a beautiful Countenance of the Savior which is shining from the most true Orthodox faith!”

Before the Holy Communion the choir prayerfully sang the Paschal hymns for the last time in this year.

After the dismissal of the Liturgy the Rector preached a short homily in English to convey the main thoughts of his Russian homily.

Following the sermon the Rector congratulated the Malyshew family on the occasion of the past name day of their daughter Elena celebrated on June 3. Fr. Igor wished our youngest parishioner God’s blessings and intercession of her heavenly patron, Holy Equal to the Apostles Empress Helen. Traditional Polychronion (“Mnogaia leta!”) was sung.