On July 28th on the 5th Sunday after Pentecost the Church also celebrated feast of the Holy Equal to the Apostles Prince Vladimir. We had a solemn service at our temple headed by our Rector, Archpriest Igor Tarasov.
Following the Scripture readings Fr. Igor preached a homily in which he greeted parishioners on the occasion of a triple celebration: Sunday remembrance of Christ Resurrection, feast dedicated to the holy Fathers of the first six Ecumenical Councils, as well as the feast of St. Vladimir. The Rector recalled that these days all the Russian Church celebrates 1025th Anniversary of Christianization of Kievan Rus’, a jubilee of our Christianity. In his sermon Fr. Igor compared the first Gospel reading of the 5th Sunday and the historical facts of the spiritual life of the Eastern Slavs before and after embracing Christianity. Fr. Igor said,
“Today’s Gospel concerns casting out of demons from two possessed men. It tells us that the demons entered into a herd of swine and then it tells us of the suicide of those swine. We should note that the people in the country of the Gergesenes keeping the swine were disobeying the Jewish law. That is why they begged Christ to leave their area, practically chasing the Son of God away. That makes us think that the disobedience of these people explains why two of them became possessed”.
“Thus, we learn that disobedience of God leads to misfortune. So as a life without true faith.”
“These days we celebrate an anniversary of the Baptism of the Russian lands. We may see that before becoming a Christian nation the Eastern Slavs living in Kievan Rus’ led a life full of misfortunes, crimes, superstitions and abuses. But after receiving holy Baptism prince Vladimir totally changed. Although many other people of Rus’ in the course of history still sinned, committed crimes and iniquities, the whole mindset of the Russian people changed after the Baptism. Our ancestors became a part of the European, Christian world, of the Christian civilization. God also blessed the Russian lands by allowing them to flourish under the rule of the Orthodox tsars and emperors. But when the Russian people turned away from the true faith, life in the country became full of sorrows. Famine, wars (one of which was fratricidal), abuses, persecutions of the different social classes, economical problems – all these misfortunes fell upon the Russian land and its inhabitants.”
“But the lesson of today’s Gospel is also important for every nation. If a nation lives in true Christian faith, cherishes right values and obeys the God’s law, then it enjoys a relatively good and prosperous life. It becomes blessed by God. But if a nation lives in the darkness, it suffers from many misfortunes. Such a darkness can be either paganism or atheism or any false religion. Nations living with the false beliefs, with the wrong values become corrupted by sins and iniquities; they experience social tension, wars, economic problems, abuses and crimes. They resemble those swineherd of today’s Gospel who felt sorry for the swine perished in the lake and begged the Son of God to leave their city.”
Fr. Igor concluded his homily saying, “Therefore, let us learn from today’s Gospel to be faithful to God, to obey His law and to cherish the true moral values given to us by the Lord. Let us also follow the example of the Holy Equal to the Apostles princes Vladimir and Olga who enlightened Eastern Slavs with Christian faith. Let us remember that their own lives changed after embracing Christianity. Life of the whole nation of Kievan Rus’ changed after becoming a Christian country. Let us spiritually belong to that Christian family held by the holy Russian Orthodox Church, a family born from the baptismal font of St. Vladimir. In this family we will be blessed by God, protected by the Most Holy Theotokos, by the intercession of the Saints. And further we may become saved and inherit eternal life promised to those who know the true God and His Son, Jesus Christ. Amen.”
At the end of the Liturgy Fr. Igor greeted our Warden and Choir director, Olga Roussanow on the occasion of her past name day. A “Mnogaya leta” hymn was sung in her honor. Then priest and the altar servers performed an office of glorifying in front of the icon of St. Vladimir, singing troparion, kontakion and magnification in honor of this Saint.
After the service parishioners enjoyed delicious food, including Georgian meals prepared by the Kay family. Fr. Igor greeted Olga Roussanow at the table and proposed a toast to her past name day celebration. 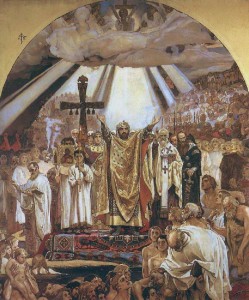 Our Rector, Archpriest Igor Tarasov is very glad to share good news of his achievement with the parishioners and friends of St. George Church. He recently completed his studies at Kiev Theological Academy in Ukraine. On June 7, 2013 Fr. Igor successfully defended a thesis in Church History before the Academic council and was awarded a diploma with honors.
Graduation ceremony took place in Kiev Cave Lavra on Friday, June 14. A prayer service of thanksgiving was celebrated by the Academy Rector, His Eminence, Anthony, Metropolitan of Boryspil. Following the service His Eminence had an inspiring speech about the tasks and mission of the educated clergy of the Orthodox Church. Then graduates received their diplomas along with the blessing of the Metropolitan.
Upon his return to the United States Fr. Igor was congratulated by His Eminence, Archbishop Justinian. Our pastor was also greeted by our parishioners who welcomed him back at our Sunday Liturgy on June 30 and a coffee hour which took place after the service.