On August 28, on the feast of the Dormition of the Most Holy Mother of God we held a nice celebration at St. George Church. Our Rector, Archpriest Igor Tarasov served the Divine Liturgy. After the Gospel lesson he preached the following homily:

“Dear brothers and sisters in Christ! Celebrating today’s feast of the Dormition, the Falling-Asleep of the Most Holy Mother of God, we come to the ending of the Church year. And we are reminded that the liturgical year begins in September with the Birth of the Mother of God and ends with the feast of Her Falling Asleep”.
“Today’s feast also explains to us the origin of the hymn that we sing to the Mother of God: “More honorable than the cherubim, beyond compare more glorious than the seraphim”. These are not simply beautiful words that a pious Church writer composed, they have an origin in a spiritual revelation”.
“This feast reminds us of how our Lord from the Cross entrusted the care of His Mother to the Apostle John the Theologian. Tradition tells us that us the Holy Virgin, when She was about 60 years old, was visited by the Archangel Gabriel, who long before had announced to her the conception of Christ in her womb. He now announced to Her that in 3 days She will fall asleep. When it did happen the Apostles were miraculously brought to Jerusalem to make their farewells. The Virgin gave away all her earthly possessions to poor widows as she made ready for her burial in Gethsemane, next to Her parents St. Joachim and Anna and also Her spouse St. Joseph”.
“Tradition further tells us that the Most Holy Mother of God comforted the grieving.  Her house was filled with light, Her face shone and Her body was fragrant, as Christ came with the Angels to take Her soul, as we can see from the icon of this feast. We are reminded how Her soul was taken up by Her Son, together with the cherubim and the seraphim, and now we understand the origin of our hymn: “More honorable than the cherubim, more glorious beyond compare than the seraphim”. We remember how the Apostles, singing in procession, took Her body to the tomb which then they sealed”.
“We recall how the Apostle Thomas arrived later and wanted too to make his farewell; and so the tomb was unsealed and found empty except for the burial clothes and the wonderful fragrance. And from the very beginning we Orthodox have piously taken this to mean that the body of the Holy Virgin was so pure that it too had been taken up to heaven, and that is why we have nowhere any bodily relic of the Mother of God”.
“And we understand by this that the first in the Kingdom of heaven after Christ is the Holy Virgin. We understand by this that even given the weakness of human nature it is possible for our bodies to attain to utmost holiness. The Mother of God is, after Christ, the first-fruit of the Resurrection and shows us the way to the life of the Resurrection”.
“Of course there are people who will tell you that none of this is written in the Bible. But for us Orthodox the Holy Scriptures are only part of the ongoing Revelation of the Holy Spirit, which we call the Tradition. We are not dead to the Spirit, the Spirit speaks to us still, with ever more revelations about the life of the coming Kingdom”.
“We began by saying that with this feast we come to the end of the Church year. It reminds us of the ending of human life on earth. It is indeed our destiny to die; it is the only certain thing in this life; every day that passes we draw one day nearer to our deaths. However, whatever our destiny, our ambition is not to die, but rather to fall asleep, in the manner of the Virgin, and have our souls taken to heaven by the holy Angels, that death might become a mere passage from mortal life to immortality, from this life to eternity in the everlasting Kingdom of Christ and all His Saints”.

The choir prayerfully performed hymns dedicated to the Most Holy Mother of God and Her Dormition during preparation for Holy Communion.

Following the dismissal of the Liturgy the Rector and the altar server performed the rite of glorification singing the troparion, kontakion and magnification of the feast before the icon of the Dormition in the middle of the church. Then the Rector congratulated all the faithful on the feast. 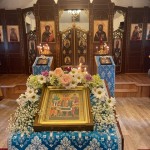 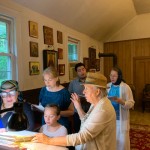 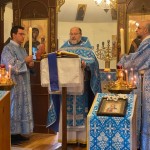 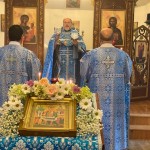 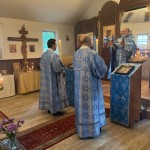 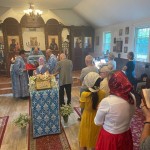 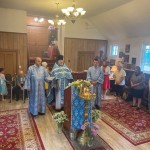 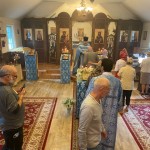